Witnesses were not 'trusted source of truth,' Ghomeshi judgment says

Jian Ghomeshi, a well-known Toronto personality and former radio host, has been acquitted of all charges in his high-profile sexual assault trial.

While delivering his decision to a packed courtroom at Old City Hall Thursday morning, Justice William Horkins said all three witnesses “deliberately” decided to withhold important information on the stand, a choice which undermined their credibility as witnesses.

Their evidence, he said, failed to prove that Ghomeshi was guilty of the charges beyond a reasonable doubt.

“The harsh reality is that once a witness has been shown to be deceptive and manipulative in giving their evidence, that witness can no longer expect the Court to consider them to be a trusted source of the truth. I am forced to conclude that it is impossible for the Court to have sufficient faith in the reliability or sincerity of these complainants,” Horkins wrote in his judgment released Thursday.

Ghomeshi, who had been charged with four counts of sexual assault and one count of overcoming resistance by choking stemming from allegations made by three women, remained composed after the judge read his decision, going over to his mother and sister who were seated in the front row for hugs.

His lawyer Marie Henein also hugged his mother after court was dismissed.

While Ghomeshi and Henein refused to comment on the case and ignored questions from reporters as they left court through the back door, his sister and mother briefly appeared in front of a crush of media and protesters waiting out front.

“While many people have analyzed this trial and the events leading up to it in symbolic terms, what we want to say is deeply personal,” said Dr. Jila Ghomeshi, reading from a prepared note. “We are not speaking as, for or against women but as members of a close family. Jian is not a symbol to us but a beloved brother and son.

“My mother and I love Jian very much,” she continued. “Our hardest burden has been our feeling of helplessness as we have watched him endure a punishment that was delivered not only prior to a verdict but prior to any semblance of due process for well over a year.”

She also asked for privacy for her family as they “slowly heal from a process that has been extremely difficult.”

Witness prepared to tell “half the truth”

Horkins had strong words for the three complainants as he reviewed their testimony in detail in his decision.

All three complainants, he said, withheld information about their contact with Ghomeshi following the alleged assaults, which were said to have occurred between December 2002 and July 2003.

He said their testimony about how they felt about Ghomeshi following the assaults was “out of harmony” with a series of emails defence lawyer Marie Henein presented to the court during cross-examination.

All three women testified that they had no desire to maintain contact with Ghomeshi but were later confronted with the emails during cross-examination that suggested the opposite.

During cross-examination of the first complainant in the case, Henein presented two emails the witness sent Ghomeshi more than a year after the accused allegedly assaulted her in December 2002 and January 2003. The witness had made no mention of the emails in her media interviews, her statement to police or during her testimony at the trial.

One of the emails contained a photo of the witness in a string bikini on the beach.

“This is not an email that she could have simply forgotten about. It reveals conduct completely inconsistent with her assertion that the mere thought of Mr. Ghomeshi traumatized her,” Horkins wrote in his decision.

“It was only after she was confronted in cross-examination with the actual emails and attachment that (the first complainant) suddenly remembered not just attempting to contact Mr. Ghomeshi but also that it was part of a plan. She said that her emails were sent as “bait” to try to draw out Mr. Ghomeshi to contact her directly so that she could confront him with what he had done to her.”

While Horkins said that “spontaneous explanation” could be true, it was not consistent with her previous stance that she wanted nothing to do with him.

“(The witness’) evidence in-chief seemed rational and balanced. Under cross-examination, the value of her evidence suffered irreparable damage,” Horkins added.

She only came forward with that information shortly before she was scheduled to testify.

“It became clear at trial that Ms. DeCoutere very deliberately chose not to be completely honest with the police,” Horkins said.

DeCoutere sent Ghomeshi a series of emails that were sexually suggestive in nature in the days, weeks and even years after he allegedly choked and slapped her in July 2003.

An email she sent the accused less than 24 hours after the alleged assault read, “You kicked my a** last night and that makes me want to f*** your brains out tonight.”

Weeks later, the actress sent Ghomeshi a lengthy hand-written letter where she said she was, “sad we didn’t spend the night together” and ends the letter by saying “I love your hands.”

The two maintained contact and even spent time together in 2004 at a film and television event in Banff.

DeCoutere maintained that her contact with the accused following the assault was irrelevant to the charges he is facing and said she only kept in touch with him to “normalize” the situation.

She too came forward with last-minute disclosure about contact she had with Ghomeshi following the alleged attack.

Not long after he allegedly assaulted her in a Toronto park in the summer of 2003, the witness admitted she masturbated him during a subsequent sexual encounter.

“When (the third complainant) decided to make this disclosure, the other two complainants had already given evidence and had been seriously embarrassed when confronted with their own dramatic non-disclosures,” Horkins said.

“I accept Ms. Henein’s characterization of this behaviour. (The witness) was clearly “playing chicken” with the justice system. She was prepared to tell half the truth for as long as she thought she might get away with it.”

‘Weight off my shoulders,’ witness says

After court was dismissed and Ghomeshi and his family left, a lawyer for the first witness to testify came out to address the media.

Jacob Jesin read out a prepared statement written by his client to reporters.

“I was never invested in the outcome of the verdict. For me, this journey allowed me to face Mr. Ghomeshi and tell my story publicly for the first time. I always understood that a conviction would be difficult. While my story may not have passed the high legal test for proof, it remains my position that the evidence of the substantive issues is truthful,” the statement read.

“I am disappointed that his Honour did not note in the decision that I was mostly unchallenged about the substantive allegations.”

She added that the process, though difficult, was “worthwhile” and “empowering.”

“I hope that my coming forward and sharing what happened to me gives strength to other victims of sexual assault. I encourage anyone who is a victim of abuse to come forward, seek assistance and not be afraid of what may happen,” the statement concluded.

DeCoutere also walked out of the courtroom with police sheltering her from the media horde.

She only smiled at reporters as they shouted questions to her as she walked across Queen Street and into the Sheraton.

Speaking outside the courthouse Thursday, Crown prosecutor Michael Callaghan noted that the Crown is still within the 30-day appeal period.

“Obviously we know Justice Horkins. We have a great deal of respect for him. He is an experienced jurist but we just received the judgment,” he said.

“We are going to have a chance over the long weekend to take a look at it, consider our position but that is all we had to say today.”

Callaghan was abruptly cut short by a screaming and topless protester who stormed the podium.

The woman, who had "Women declare Ghomeshi guilty" scrawled on her back, was pinned down by police and arrested after a brief scuffle.

She was one of more than a dozen protesters who stood outside court all morning chanting “We believe survivors” – a phrase that has become a popular hashtag online in support of the complainants. 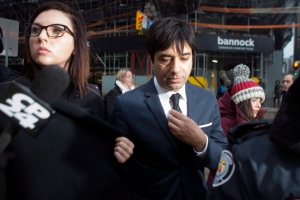