What will Ontario's reopening plan look like? Province remains tight-lipped

TORONTO -- Ontario's stay-at-home order is expected to be extended until at least June in an effort to further drive down the third COVID-19 pandemic wave.

However, municipal officials, business owners, and residents have been increasingly demanding transparency and clarity for which benchmarks will lead to a reopening.

On Monday, Ontario’s Chief Medical Officer of Health Dr. David Williams said he would like to see the number of new daily COVID-19 cases “well below” 1,000 province-wide before considering loosening restrictions.

But there are more factors that need to be considered, including the percentage of the population vaccinated, the impact on our health-care system and how much the virus is spreading.

Speaking with CTV’s Power Play on Monday, Mississauga Mayor Bonnie Crombie said the public needs to know what thresholds must be met before the stay-at-home order is lifted.

Crombie said mayors in the Greater Toronto and Hamilton Area (GTHA) met on Monday and all agreed to urge the province to be clear on this front.

“What we asked for was clarity with respect to communication to our businesses and our residents on what the situation will be for the long weekend,” Crombie said.

“The stay at home order was to be lifted by (May) 19th. That clearly won't be the case… we need some clarity, to where we will move to – whether it will be the colour-coded framework, and when that announcement would be made.”

Some jurisdictions, like Saskatchewan, have a pretty clear-cut plan of what can reopen and when. That province has a three-step plan: 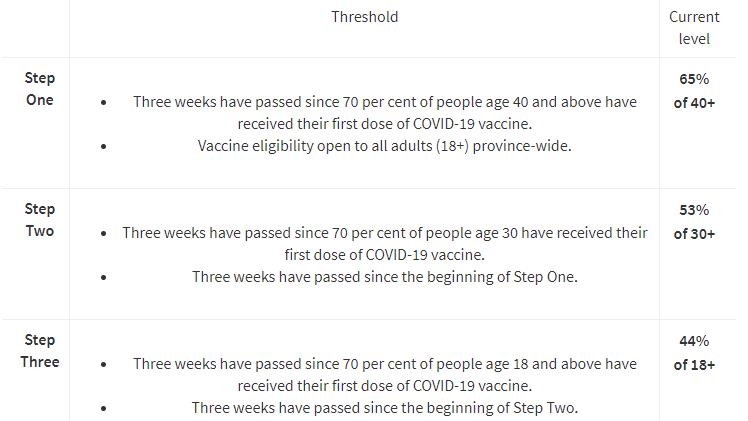 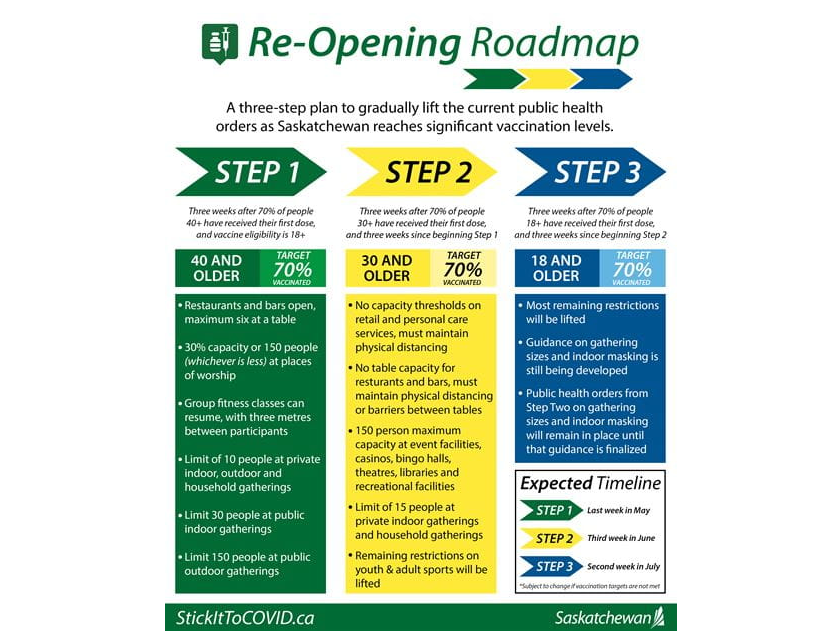 It lays out exactly when most restrictions will be lifted – giving residents some hope, and something to look forward to.

CTV News Toronto reached out to officials with the Ontario Ministry of Health and Premier Doug Ford’s office to ask if they were coming up with a plan similar to what Saskatchewan has developed.

“Ontario, like many other provinces and jurisdictions around the world, is battling a third wave of more contagious variants and we are taking the necessary action required to control the spread,” a spokesperson said in response to CTV News Toronto. “The stay-at-home order and enhanced public health measures we’ve introduced are designed to reduce mobility and limit the risk of transmission in order to stabilize and protect our health care system.

“Our government will continue (to) act on the advice of the chief medical officer of health who will review the science, data and trends along with collaborating with local medical officers of health and our team of expert health officials on if and when public health measure(s) can be adjusted.”

“We are, of course, actively considering how a reopening would happen when it’s the appropriate time,” Elliott said. “This is something that does take a lot of time, and thought, and context, and hearing from different groups, different businesses, about the time frames they would need. So that work is happening.”

Many are wondering if Ontario would we see a return to the colour-coded reopening framework that takes a regional approach once again.

“So we need some clarity to where we will move to, whether it will be the colour-coded framework, and when that announcement would be made.”

“I think you have to obviously give people some indication of what the next few months are going to look like,” Chagla said.

“Realistically, we're not going to be reopening back to the way it was pre-pandemic, we're probably going to go through a slow, careful, low-risk approach and then start scaling up as community rates come down,” he said.

Chagla said having a framework in place well before reopening occurs could also actually inspire people to get their shots when their time arrives.

“You can tie your ability to get vaccinated to your ability to go out to a restaurant, to go to a patio, to see your friends, right?” Chagla said. “I think that's important. Yes, individual vaccines will help with individual risk, but the collective vaccines help us get back to normal, I think you get a buy-in approach for sure.”

As for what would work best as a reopening plan, Chagla believes it could be a hybrid of the colour-coded framework, and the original three-stage, province-wide approach the province followed last spring.

“I think you could definitely develop a regional framework, applying it to Northern Ontario, for example, because you can't really slip into Thunder Bay from Sudbury to Saulte Ste. Marie, they're very separate cities,” Chagla said.

“But I do think southwestern Ontario, really from almost London up to Durham is such a linked area and so mobile between a large population, that it makes it very difficult to come up with a regional plan and you may have to treat that region almost as a global plan of opening and closing.”