Toronto woke up to a brutally cold morning Wednesday, with temperatures dipping down to what felt like -20 C with the wind chill.

An extreme cold weather alert was issued by Toronto Public Health on Tuesday ahead of the cold snap. It was cancelled at 12 p.m. today, as temperatures warmed up to a daytime high of -4 C.

Cold weather alerts are issued when Environment Canada predicts temperatures of -15 C or cooler for Toronto, and activates a number of services for the city’s vulnerable residents.

On Wednesday morning, temperatures in the city dipped down to -13 C but felt about seven degrees colder with the wind chill. It is forecast to warm up to -4 C, with light flurries in the afternoon. 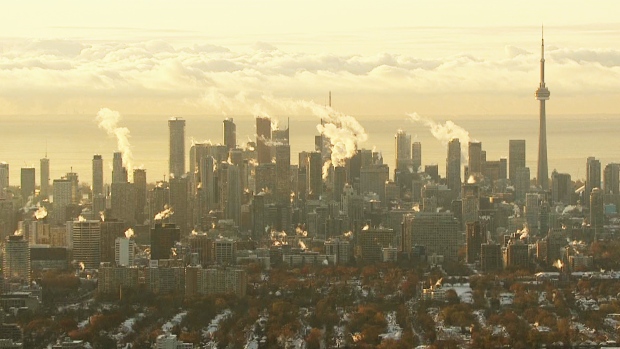 "It's a chilly start to the day," CP24 meteorologist Bill Coulter said. "Winds are light but it doesn’t take much at these depth of temperatures to give you a significant wind chill."

The warming centre at Metro Hall that was opened during the weather alert will remain open until 12 p.m. on Thursday, the city said.

In a statement, Toronto Public Health asks residents to help vulnerable people by calling 311 if there is need for street outreach assistance. They are also warning members of the public to take precautions and wear appropriate clothing while outdoors.

Thursday is forecast to be warmer, with a high near 1 C expected. On Friday, it’s expected to be 3 C.