TORONTO – A rally promoting unity was held Saturday in response to an anti-LGBTQ Christian group's march through the city's gay village.

A group of evangelicals with the Christ Forgiveness Ministry, including street preacher David Lynn and longtime activist Charles McVety, marched up Church Street calling for the protection of free-speech and civil liberties.

The march was in response to several incidents this year where preachers, including Lynn, were detained after bringing loudspeakers into The Village and allegedly provoking fights with people nearby.

The 519 Community Centre, area councillor Kristyn Wong-Tam and others organized a unity rally, which kicked off around 11:30 a.m. to support the LGBTQ community.

Justin Khan, one of the leaders of the rally, said the community came together to make sure everyone feels welcome despite the march.

"Folks are aware, they can feel tension ... but I think power in numbers speaks volumes," he said. "We will stand together, we will stand united, and peacefully we will defend our community and Church Street."

"Our message is not hate, it's love and acceptance."

The LGBTQ community says the group is anti-gay, while the group argues that it merely disagrees with "many of the lifestyle choices of the LGBT community."

Police were at the rallies to try to prevent confrontations. 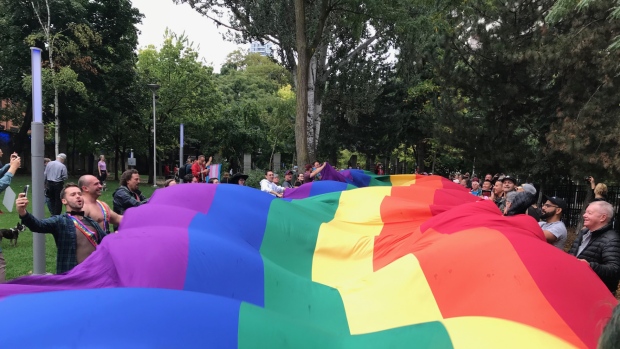 Toronto Mayor John Tory, who attended the rally, said that while it was hard legally to stop the march by the Christian group, he wanted to show the city was against it.

"When there is a threat, when there are people our promoting division and polarization and stigmatization against the LGBTQ community or anybody else, I think it's my job to stand up and say no, that's not the way we live here, that's not what we're about in Toronto," said Tory.

"It's fragile you know, human rights are fragile, the kind of respect we've built up here is fragile in a certain way," Tory said.

He said it was important to show opposition to the group and fight to maintain the sense of inclusion in the city.

"Every single time there's somebody who wants to threaten the sense of inclusion, the sense of support, the sense of embracing, the sense of unity that we're trying to bring about in this, the most diverse city in the world, that you stand up and say no."

With files from The Canadian Press and CP24