Toronto Mayor Rob Ford says he has 'no reason to resign'

Toronto Mayor Rob Ford remained steadfast in the face of allegations against him Thursday, telling reporters he can't defend himself because the matter is before the courts and he "has no reason to resign."

"I'm sure everybody has seen the allegations against me today," Ford said before a throng of reporters Thursday afternoon.

"I wish I could come out and defend myself, unfortunately I can't because it's before the courts. That’s all I can say."

He added that he has no reason to resign and he's going to continue doing what he was elected to do, including returning phone calls from constituents and saving money for taxpayers.

Ford made the announcement hours after police confirmed that a digital video file had been recovered in which Ford appears, and which "depicts images that are consistent with those previously reported in the press."

Police chief Bill Blair made the announcement Thursday morning during a news conference, saying he was "disappointed" by what he saw in the video. Blair would not go into further detail.

In mid-May, U.S. website Gawker and the Toronto Star reported that a number of their staff members had been shown a video of Ford apparently using crack cocaine. Ford had previously said he does not use crack cocaine and that the alleged video does not exist.

Blair said that based on the video recovered by police there are no reasonable grounds to lay charges.

After Blair's stunning announcement, a number of councillors called on Ford to resign or address the police announcement.

Coun. Gloria Lindsay Luby told reporters at City Hall that it is "morally important" for Ford to step down, but she doubted he would.

"His tendency is to just tough it out, (but) it's not a football game," she said.

Coun. Paula Fletcher told reporters that it was now up to Ford to come forward and "act like a mayor."

Fletcher refrained from calling on Ford to resign, saying it was now up to him to decide what to do.

"The mayor at this point … has to act in the best interest of this city of Toronto and of the citizens of Toronto," she said.

Coun. Jaye Robinson told CTV News Channel that Ford’s statement to the media was “unacceptable” in light of the “very serious allegations swirling around him.”

Robinson said Ford should temporarily step aside from the mayor’s office.

“We want to celebrate the city that we live in, and this doesn’t do any good for our reputation,” she said.

“He’s not convicted of anything, but all of the dots have been laid out before us in the course of the past year, and today they seem to be connected,” he said.

Parker said Ford has struggled to be a leader on council in his three years as mayor, and the latest development “does nothing to improve” his effectiveness.

He said, however, that it was too soon to say if Ford could survive the scandal.

"They mayor has had an amazing ability over the last couple of years to survive the ups and downs of public office," he said, noting that the story was continuing to unfold.

Police document released to the public

Earlier Thursday a police document was released to the public, showing that the alleged video of Ford was the focus of an investigation that led to the arrest of his friend.

According to the document, police launched an investigation following the initial Gawker and Star reports.

The police document details the evidence Toronto police collected in order to get a search warrant for the mayor's friend Alexander Lisi.

None of the allegations in the document have been tested or proven in court.

Lisi was arrested earlier in October and charged with four drug offences, including trafficking marijuana.

During the press conference Thursday morning, Blair told reporters that Lisi had been arrested again and is facing an extortion charge.

Today’s revelations about the mayor were met with mixed reaction in his Etobicoke neighbourhood, which is home to a large portion of Ford’s support base.

Some said they are questioning Ford in light of the latest controversy.

“Certainly, if something has been done wrong ... then it needs to be looked at from a judicial point of view,” one resident told CTV Toronto’s Ashley Rowe.

Others said they were reserving judgment, instead choosing to wait and see what’s proven in court.

“If he’s really guilty of something, then sure he deserves to pay for that, but let’s see a little more to it than hearsay,” said another man.

Still, other voters said they have had enough.

“There’s so much controversy I don’t think I’ll vote for him again, although I think he has done a fairly good job,” said one woman. 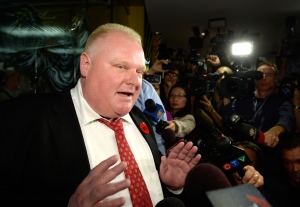 Toronto Mayor Rob Ford says he has 'no reason to resign'