A young Toronto man lost nearly $30,000 in just 30 minutes after he said his wallet was stolen by "intricate thieves" who went on a spending spree at Yorkdale Shopping Centre.

Anthony Spagnolo, who owns a consulting firm that specializes in construction management, said he believes his wallet was taken from him while he was walking to lunch with clients in the Yonge Street and St. Clair Avenue area on Sept. 5.

The 29-year-old went to lunch around 12:10 p.m. and only knew something was wrong when he got a message from American Express at 12:40 p.m. saying someone had tried to change the login for his online account.

After noticing his wallet was missing, Spagnolo contacted his different credit card companies and was shocked to learn thousands of dollars had already been spent.

Credit card records show the thieves spent more than $15,000 at Apple in four separate transactions. Additionally, about $9,000 was spent at Holt Renfrew, $2,000 at Continental Currency Exchange and thousands in cash was withdrawn from two debit cards.

Toronto police confirmed to CTV News Toronto they are investigating the fraudulent charges but currently have no suspects.

"There is no way this was the work of one person."

Spagnolo contacted CTV News Toronto after reading about a similar story about a businessman who lost $19,000 in 27 minutes in the financial district on Sept. 9. 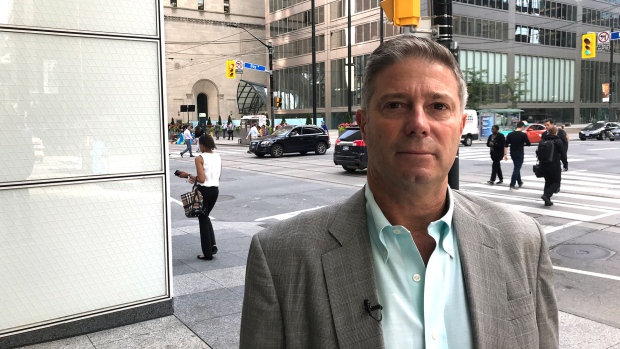 "My mouth dropped when I saw the story," Spagnolo said. "It happened around the same time and same couple credit cards."

Spagnolo said he's already been refunded but noted that the ordeal has been a massive inconvenience.

In the future, Spagnolo said he will only carry one credit card with him to avoid this happening again.

"All this is an inconvenience to me."