Toronto Hydro has finished building a 600-metre-long tunnel below the city’s downtown area -- a major step towards the expansion of Toronto’s electricity production.

The tunnel, which runs about 35 metres below Front and Simcoe streets, will connect the new, $195 million Copeland Transformer Station to the rest of the city’s energy grid.

“Both the capacity was needed and the backup to our other systems,” Haines said.

Once completed, the transformer station will add about 144 megavolt-amps to Toronto’s hydro system -- enough electricity to power about 70 condo buildings

Shown below, the tunnel was one of the most time-consuming and challenging steps in project, said project supervisor Shuan Pinard, with workers spending as much as six months building a single shaft leading down into the tunnel. 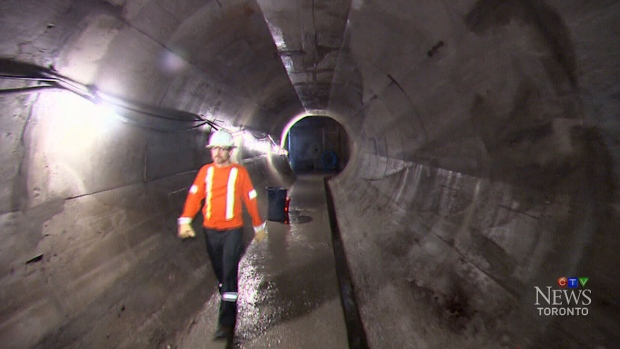 Haines said this transformer is just the beginning in a plan to overhaul the city’s electricity grid.

“As we see the loads building in this area, when we need it, we’ll make sure the capacity is coming out of the station,” he said.

With the current downtown transformers expected to be working at 95 per cent capacity by 2019, the company is planning a second phase in the expansion of the city’s hydroelectric grid.

The Copeland Transformer Station is the first hydro station to be built in downtown Toronto since the 1950s and is only the second underground station in Canada.

The project is expected to be completed by the spring of 2016.

With a report from Janice Golding