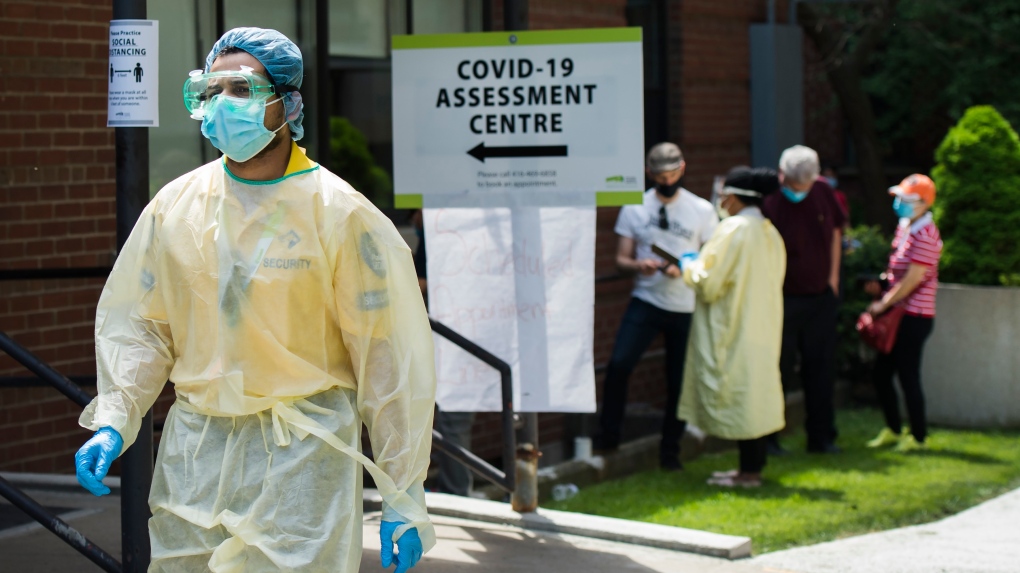 People line up to be tested at a COVID-19 assessment centre in Toronto on Tuesday, May 26, 2020. THE CANADIAN PRESS/Nathan Denette

TORONTO -- Toronto’s board of health is calling on the province to begin collecting data on race, occupation and socioeconomic information when investigating COVID-19 cases.

In a letter sent to Ontario’s minister of health and chief medical officer, the board cites experts who have indicated that socioeconomic data is critical to understanding the pandemic and how the disease spreads.

At the same time, the board said the provincial government has not committed to collecting this data.

“Instead, it has been suggested that each of Ontario’s 34 local public health units could collect their own data on a voluntary basis,” Joe Cressy, who chairs the city's board of health, wrote. “This approach will not provide a complete picture of how COVID-19 is affecting Ontarians.”

In early May, Toronto’s health officials said that preliminary findings suggested the disease disproportionally affected certain communities in the city. This information prompted officials to start asking those who tested positive for COVID-19 about their ethnicity and socio-economic status.

After a month of collecting this data, Cressy said that the connection between COVID-19 and factors such as income, housing and race have become “more apparent.”

These findings were made even more clear on May 27 when officials released a map of COVID-19 infections in the city that showed the northern edges of North York, Etobicoke and Scarborough have been hit hardest by the disease.

The neighbourhood with the most COVID-19 cases in Toronto is Glenfield-Jane Heights in North York with 307 cases, while the one with the least is Lambton Baby Point, in York, where there are only seven cases.

“In order to tackle COVID-19 we must fully understand the virus, and who is most at risk,” Cressy said in his letter. “This information is crucial for our response in many areas, such as what jobs pose the greatest risk, what type of household composition helps or hinders transmission, and what ethno-racial identities are the disproportionately impacted.”

A day after Toronto health officials said they would be collecting race and socioeconomic data, the province said they will soon be asking similar questions of COVID-19 patients—but that the questions, which still hadn’t been formulated at the time, will be voluntary.

On behalf of Toronto's Board of Health, I sent a letter to Ontario's Minister of Health requesting that the Province immediately begin the collection and sharing of COVID-19 data disaggregated by race, occupation, and other socio-economic indicators. pic.twitter.com/eLoivXtUqI

Cressy added that unless the collection of this data is mandatory and standardized across health units, it will “not result in a clear or consistent picture of the impacts of COVID-19.”

“The old adage of ‘what gets measured gets done’ is especially relevant now.”

“Access to data and information is essential to defeating this virus and protecting the public. With this in mind, I ask for your government's urgent support for the collection and public release of COVID-19 data disaggregated by race, occupation, and socio-economic indicators, as we continue to move through phases of this pandemic.”

A spokesperson for Ontario Health Minister Christine Elliott said that the provincial government recognizes that the collection of race-based data is important to guide decision-making. The spokesperson also said that the ministry is considering a proposal to “make income level and race for COVID-19 cases reportable to local public health units."

"We are in the process of working with public health and privacy experts to determine how best to collect this data across all public health units," Hayley Chazan said.

"It's important to note that mandating the collection of this data would require regulatory changes. As discussions about these changes are ongoing, we are working with partners to determine implementation.”