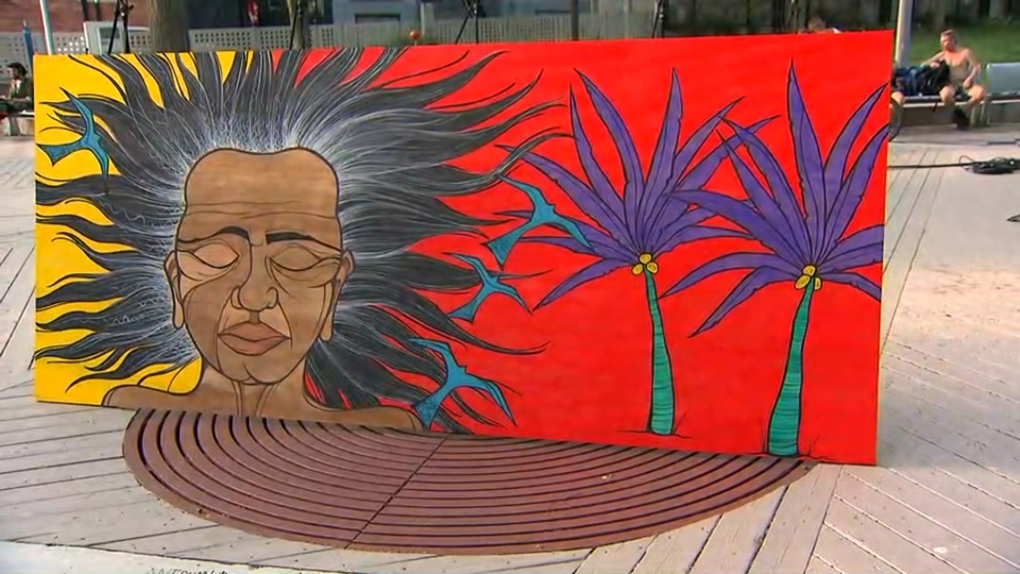 One year after a gunman stormed an Orlando nightclub killing 49 people, a Toronto artist closely connected to the victims of the massacre has unveiled her tribute in the city’s Church-Wellesley Village.

Janet Romero-Leiva calls the wood-paneled mural ‘Still Estamos Aqui’ – Spanish for “we are still here” – commemorating the largely Hispanic victims at Pulse nightclub during Latin night when the shooting occurred.

Most of those killed were of Hispanic descent. Among them were Dominicans, Mexicans and Colombians. More than 23 were of Puerto Rican origin.

“We’re used to acts of violence specific to the LGBTQ community,” Romero-Leiva told CP24 on Monday night. “For me personally it hit home because it was such a large Latinx population and I’ve never been, I guess, witness to that in such close proximity.”

The piece was revealed outside The 519 – a Toronto agency that serves as Canada’s largest LGBTQ support centre – during a candlelight vigil at Barbara Hall Park on Church Street between 8 p.m. and 10 p.m.

“LGBTQ2S communities around the world were confronted with the reality that racism and homo-, bi- and transphobia still exist,” says a 519 release about the event. “Pulse, a gay nightclub in Orlando, became the target of violence resulting in the deaths of 49 people, many of whom belonging to our Latinx community.”

Romero-Leiva describes “Latinx” as a gender neutral identifier for the community.

“I think a year later this tragedy is still broadly felt throughout the community,” Coun. Kristyn Wong-Tam said.

“What was so remarkable for me was to see the Latinx community and their culture and their resiliency on display … Often times their stories aren’t told.”

Along with Romero-Leiva's mural, 49 lanterns were lit after the name of each victim was read aloud on the first anniversary.

Toronto was one of many cities taking part in memorial events today for the mass shooting.

Overnight Monday, hundreds of people gathered outside Pulse as the names of each person killed was read aloud at 2:02 a.m. – the exact time when gunman Omar Mateen opened fire inside the crowded nightclub on June 12, 2016.

Pulse was a well-known gay nightclub in downtown Orlando.

Mateen pledged his allegiance to the Islamic State during the shooting before he himself was shot dead by police.

His wife, Noor Salman, has also been charged in the case. She has pleaded not guilty to aiding and abetting, as well as obstruction.