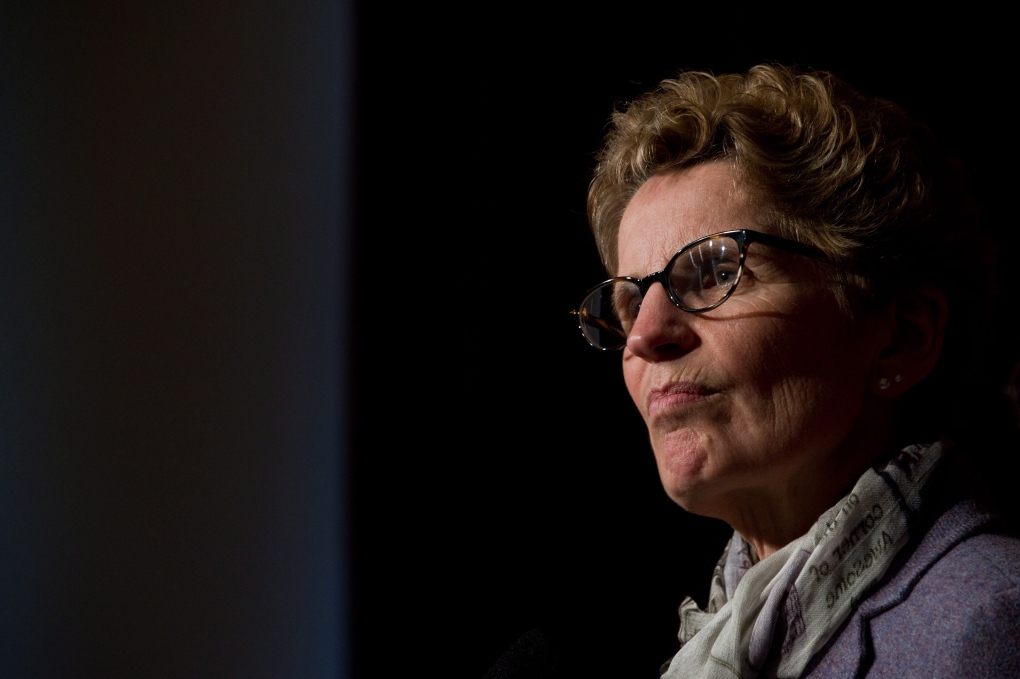 Ontario Premier Kathleen Wynne takes questions from the media after speaking to a theatre audience in Port Hope about her vision for creating jobs and growing the economy in Eastern Ontario Friday, February 7, 2014. (THE CANADIAN PRESS / Galit Rodan)

TORONTO -- Ontario's minority Liberal government is "corrupt" and should allow a confidence vote in the legislature, the Progressive Conservatives said Thursday after a police raid to find emails deleted by members of former premier Dalton McGuinty's staff.

Ontario Provincial Police executed a search warrant Wednesday at a data storage facility as part of an investigation into deleted emails on the Liberals' decisions to cancel gas plants in Oakville and Mississauga.

"If the search warrant is any indication, this government is corrupt," charged Opposition energy critic Lisa MacLeod. "So I ask the premier, will she put our confidence motion to the test? Will she face the music, and will she face the people?"

Premier Kathleen Wynne dismissed the Conservatives' accusations and said she had provided a legislative committee with tens of thousands of documents on the gas plants and also broadened its mandate so the opposition parties could get all the information they were seeking.

The opposition parties hammered away at Wynne over the police probe into the deleted emails on the decisions to cancel the gas plants prior to the 2011 election, which the auditor general estimated would cost Ontario taxpayers up to $1.1 billion.

"The premier's role, from signing the cabinet document (to cancel the Oakville plant) to her decisions as (Liberal) campaign chair, has finally caught up with her and the trail of bread crumbs led the OPP right to the premier's door," said Conservative Rob Leone. "We're at the point where it takes a team of OPP officers with crowbars just to pry these secrets out of your scandal-plagued government."

Legislative hearings into the gas plants have lasted more than a year and heard from 77 witnesses over 117 hours, said Wynne. If the opposition parties really want an election, all they have to do is defeat the government's budget this spring, she added.

"We will do our utmost to bring a budget to the house and to get that budget passed, but if that does not happen, then we know that we're into a general election," said Wynne. "But the reality is that on the issue of the relocation of the gas plants, I just want to be clear, we have provided 311,000 pages of documents, 30,000 from the premier's office."

"Ontario's data has been stolen, plain and simple, and that's why the OPP took it seriously enough to launch a criminal investigation, which has been ongoing for eight months," he said. "They've been into the premier's office for files and they now have compelled a judge with enough information to be able to serve a subpoena on another company and get in there and get files.

The premier's office pointed out that Ontario privacy commissioner Anne Cavoukian, who issued a report that was extremely critical of the government for "illegally" deleting gas plant emails, praised Wynne's open approach after she took over from McGuinty.

"She has been fully co-operative with me and my office," Cavoukian said last August. "In fairness to Premier Wynne, she said, 'you have my full co-operation, whatever you want from us."'

The Tories said the legislative committee probing the gas plant cancellations will keep digging until it finds out who ordered the coverup.