Let’s face it, there’s a little nerd in all of us. Billed as “Canada’s nerdiest bar,” Storm Crow Manor celebrates your inner geek and your desire for food, drinks and games in a meticulously designed sci-fi/fantasy environment.

Perched majestically at 580 Church St., this Victorian mansion is filled with eclectic memorabilia from all the nerdiest places: for Twin Peaks fans there’s an eerie “Black Lodge” room combined with a replica bar from “The Shining,”; cyberpunk fans can visit the “Blade Runner” room; and for those who like horror, a bar reminiscent of a hospital operating room.

[IN PHOTOS: Take a tour of Storm Crow Manor]

There’s also tons of memorabilia from the sci-fi, fantasy and horror genres.

“We want to be the place for the geek elite as well as the nerd curious,” says general manager Douglas Gregoire. “Even people who claim that they’re not nerds, I’m pretty sure you’ll come here and you’ll see something that you’re like, ‘Oh that’s cool, I really like that thing.’”

“Things” include giant, shareable cocktails like The Dark Side Bowl ($38) served in Darth Vader’s helmet and brought to your table to the music of “The Imperial March.” Or for the kids, the Potion of Power ($6) is a huge, non-alcoholic, bubbling, smoking, Shirley Temple-style drink. 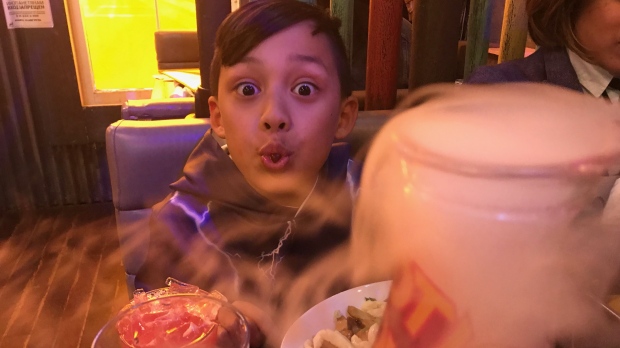 All of the food at Storm Crow Manor sounds cool and exotic, like Wolverine Poutine ($10) or Dracarys Dragon Egg ($9), but don’t worry, Gregoire describes the food as “elevated pub fare” and diners will find all the ingredients familiar. Dracarys Dragon Egg is essentially a scotch egg enhanced by fennel sausage and served with Dijon aioli on the side. Above all, Storm Crow wants to make food and drink fun.

The gods of fate are in charge when it comes to ordering shots. Patrons must roll a 20-sided die and accept the corresponding shot ($6) or pay an extra loonie to select a shot of their own. Coming soon, Gregoire describes their “Suicide Meatball Lottery”: “You get a bunch of meatballs for the table and they’re all on skewers but one of them is deathly hot and you don’t know who’s gonna get it.”

Storm Crow is also the place to be for uniquely nerdy events. “We did ‘The Dinner is Coming, A Feast of Thrones’ for the final episode of Game of Thrones,” says Gregoire. He said they also host nerd trivia nights, dungeon master workshops for Dungeons and Dragons fans, board game nights, even weekend brunch cartoon festivals. 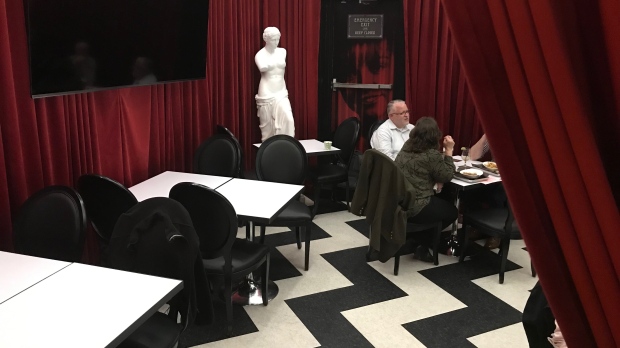 If you’re looking for something more than a little left of centre for your next dining experience and you don’t mind a few heads in jars or a washroom that looks like a dungeon, Storm Crow Manor might be the bar for you.

Storm Crow Manor is the third establishment created by owner Jason Kapalka (a founder of Pop Cap Games, makers of Bejeweled and Plants vs Zombies). His vision was of “a sports bar, but for geeks.” With that philosophy in 2012, he opened Storm Crow Tavern and later Storm Crow Alehouse both in Vancouver.