'Tell me how to heal': A year after Danforth attack, teens who lost best friend grapple with anxiety 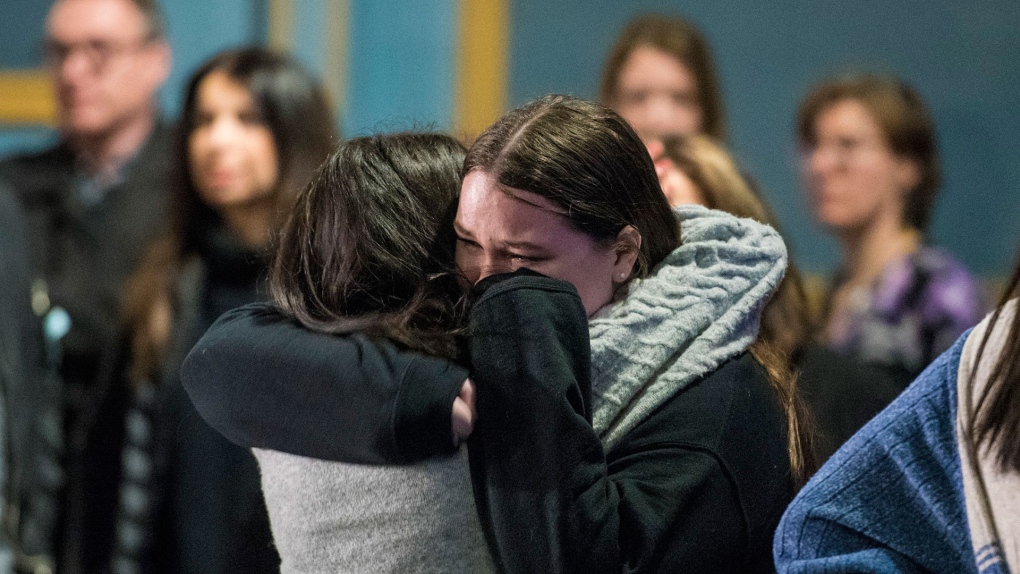 Survivors and loved ones affected by the shooting on Danforth Avenue in 2018, hug following their first public statement as a group at the Danforth Music Hall in Toronto on Friday, February 22, 2019. THE CANADIAN PRESS/ Tijana Martin

TORONTO -- They were eight care-free teenagers out celebrating a birthday when the bullets flew. The rampage that ensued on July 22, 2018, changed their lives.

Days before the first anniversary of the shooting in Greektown, four of the teens who survived the tragedy sit in the living room of an east Toronto home talking about their struggles with anxiety, depression and the feeling of loss. It's better than therapy, they say.

"I feel like the people I am surrounded with is my therapy," says Skye McLeod, as her friend Noor Samiei, whose 18th birthday they were celebrating the night of the shooting, gently holds her hand.

Their best friend, 18-year-old Reese Fallon, was one of two people who were killed when a deeply troubled 29-year-old man went on a shooting spree. Thirteen people were injured, including their other friend, Samantha Price. 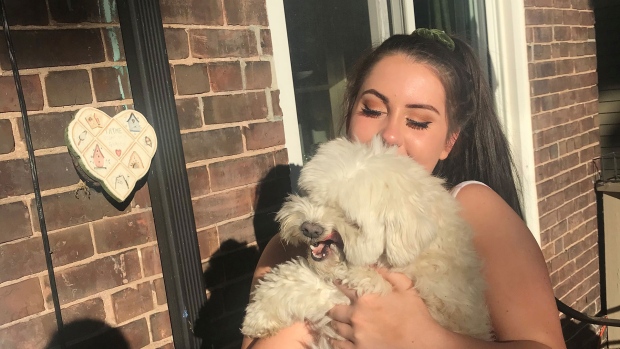 Reese Fallon is seen in this undated handout photo provided by a close friend. THE CANADIAN PRESS/HO, Noor Samiei

Price has largely recovered physically, but she says she cannot stop the morbid thoughts that often race through her mind. The 18-year-old will watch cars go by and think the driver will shoot her in the head. She'll notice a stranger on the street and fear for her life. She thinks large crowds make for a perfect place for a bomb to go off.

All four have tried various forms of therapy. Three say it didn't help.

McLeod stopped after one session with a therapist. Samiei, 19, says she saw a therapist twice.

"The therapist would look at me and if she didn't initiate the conversation, I would just look back at her," Samiei says. "What I really wanted was feedback."

"Tell me how to heal," Price says. "It sucks to go outside and be this age and not have fun." 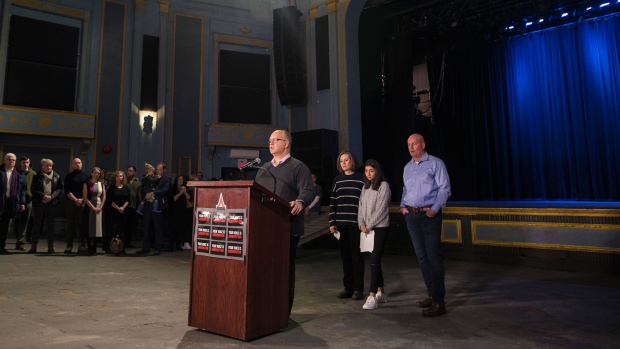 Ken Price, the father of Samantha Price, a survivor injured in the shooting on Danforth Avenue in 2018, speaks during their first public statement as a group at the Danforth Music Hall in Toronto on Friday, February 22, 2019. THE CANADIAN PRESS/ Tijana Martin

Max Smith, however, says therapy has helped his recurring anxiety.

"We just talk about what I'm feeling," he says. "(My therapist) is super helpful and gives me insight and has given me some breathing techniques."

All four say they think about the shooting a lot.

The night of the celebration started with dinner at an Italian restaurant downtown. Then they moved to Greektown for gelato. They were chatting at a nearby parkette when some noticed a man across the street, staring at them.

Price remembers Faisal Hussain raising a gun and firing. A bullet shattered her right hip and she collapsed. Next to her, two of her friends were on the ground bleeding.

"I remember looking at him," she says. "Do I get up to run? Will that make me a bigger target? Do I play dead?"

Smith, who was next to McLeod, says he crouched down when the bullets flew.

"It was like tunnel vision," he says. "I remember saying 'Skye, we have to go."'

"You saved my life," she says to Smith. He blushes. 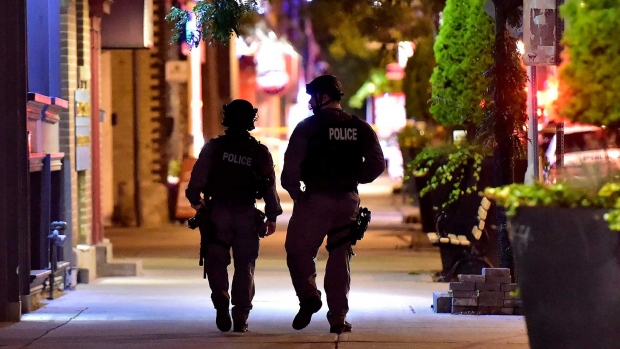 Tactical police officers walk along Danforth Avenue at the scene of a mass casualty incident in Toronto on Monday, July 23, 2018. THE CANADIAN PRESS/Frank Gunn

In the commotion, Samiei ran straight onto Danforth Avenue, tripped and fell, smashing her chin and knee on the road.

"While on the ground, I looked behind me and saw him shooting," she says.

Samiei noticed Smith, McLeod and another friend duck into a nearby cafe so she got up and followed. The four ended up in a basement bathroom with two strangers.

Price watched her friends dash into the cafe, but also noticed restaurants were closing their doors.

Somehow, despite her shattered hip, Price made her way to Christina's, a restaurant where a waitress helped her in and called for a doctor. She'd spend the next five days in hospital.

Her friends, meanwhile, were trying to track down members of their group. Samiei, while still in the basement bathroom, called Fallon repeatedly but got no answer. McLeod called her father, who rushed over.

Patrick McLeod, a retired police officer, found his daughter and her three friends in the cafe bathroom. After speaking with police at the scene, he ended up identifying Fallon's body.

The friends later learned that Fallon had run in one direction while they scrambled in another. Her body was found in the parkette where they had gathered. 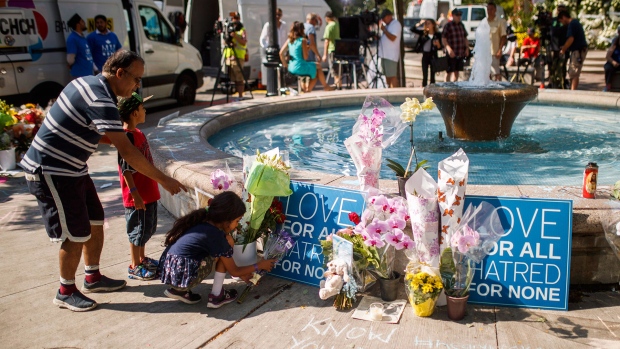 People leave flowers at a memorial honouring the victims of a shooting on Sunday evening on Danforth, Avenue in Toronto on Tuesday, July 24, 2018. THE CANADIAN PRESS/Mark Blinch

While three of them started university last September, McLeod chose to travel. She headed to Greece, but the horror of what happened soon took hold.

"I immediately had a panic attack," she says. "I had never been so depressed in my life. Crying constantly. Everything just hit me."

Her father flew over to help and McLeod eventually carried on to Italy, but delayed her trip to Australia.

"I realized I needed time at home to heal," she says.

Her travels helped, but like Price, McLeod says she grapples with disturbing thoughts. At a recent concert, for instance, she found herself thinking "this is a great place for a shooting."

Smith moved to Guelph, Ont., for university and said being away from Toronto has also helped.

"It's easy to forget about the shooting because you're just not there," he said. "It hits you when you get home."

Samiei, now a student at the University of Toronto, says commuting to the school's downtown campus was a challenge because crowds on the subway distressed her. So her mother commuted with her for months. Now, she's able to make the journey on her own.

"I will change cars if I see someone weird, though," she says.

Price has also struggled with parts of city life -- a walk around her neighbourhood on Canada Day triggered a panic attack when she heard fireworks.

"It's become so difficult," she says. "I've loved growing up here and loved living here, but I feel uncomfortable at any public event."

Despite their issues, the friends say they try to be positive as much as they can, especially when it comes to remembering Fallon.

"Reese's last meal was her favourite: raspberry and chocolate gelato," Samiei says with a smile. 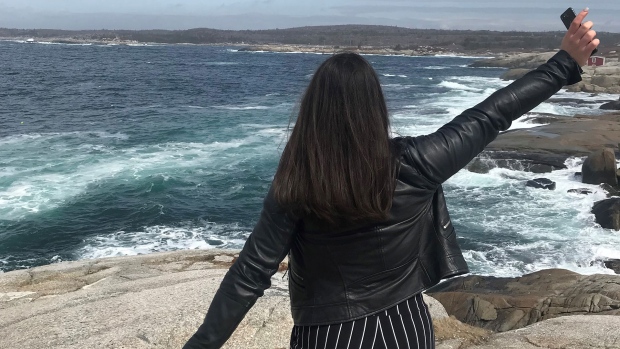 Reese Fallon is seen in this undated handout photo provided by a close friend. THE CANADIAN PRESS/HO, Noor Samiei

Smith shows a video of the group at the restaurant that night where Fallon makes a goofy face. Everyone laughs.

"As horrible as that night was, at least until then, we had such a good time," Smith says.

Samiei visits the parkette regularly to keep Fallon's memory alive. She puts photographs of her friend on a tree. Someone takes them down, but she returns to put them back up.