TORONTO -- No injuries have been reported following a string of suspicious tow truck fires in North York and Richmond Hill early Monday morning.

The first fire was reported on Drewry Avenue, located near Bathurst Street and Finch Avenue, at around 3:34 a.m.

Toronto Fire Services said crews were called to a home in the area and found a tow truck engulfed in flames.

The flames spread from the vehicle to a garage and the side of a house.

Firefighters were then able to extinguish the flames. 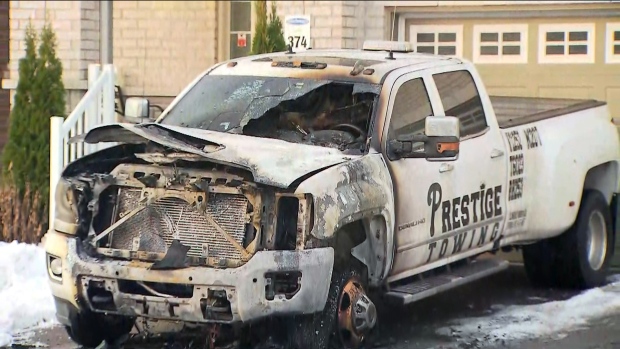 The second fire was reported in the same area at around 3:46 a.m.

A tow truck caught fire on Devondale Avenue and the flames were later put out, according to officials.

Then at around 3:50 a.m., a third tow truck fire was reported near Yonge Street and Finch Avenue.

The home owner extinguished the fire before firefighters arrived on scene.

Toronto police say they are investigating the incidents as arson and the Office of the Fire Marshal (OFM) has been called in.

At around the same time the fires were set in Toronto, two other tow truck fires were reported in Richmond Hill. 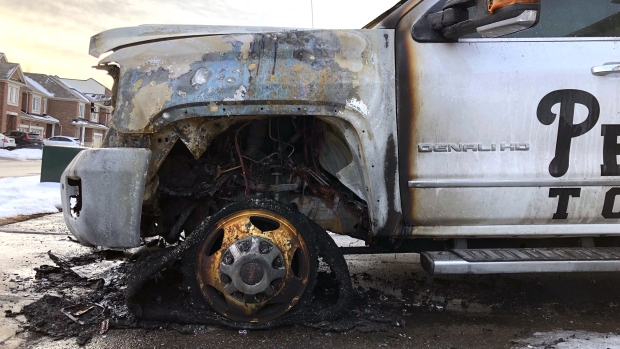 The first incident occurred on Wood Lane, near Mill and Bathurst streets, and the second fire broke out  on Collin Court, located in the area of Bathurst Street and Gamble Road.

When asked if they believe the same suspect is responsible for all three fires, Nicolle said it is too early to tell.

Police would not comment on why they believe tow trucks are being targeted.

“We have to look at all the evidence…In terms of motives and why, we are not at that point yet,” Nicolle said. “We don’t want to rule anything out right now.”

It is not clear if the fires are connected.

The fires come after growing conflict between businesses within the towing industry according to the president of the Provincial Towing Association.

“There appears to be some groups that are fighting within the industry, with the towing industry, and the issue is escalating pretty rapidly,” Graves said, speaking to CTV News Toronto on Monday.

Raymond Chan, CAA manager of government relations, said that the fires are concerning, adding that the towing industry is competitive and there’s more money up for grabs in towing, than just towing.

“A lot of the times the industry is often affiliated with auto body shops, or car rental companies, so there are spin-off parts of the economy that are the result of a primary tow as well,” Chan said.

According to Chan, only 17 out of more than 400 municipalities have tow truck regulations or by-laws.

Graves said that regulation is possible and that the association meets with government on an ongoing basis.

“We have zero tolerance for this behaviour. It is absolutely unacceptable that these activities happen in our province,” a spokesperson for the Ministry of Transportation said, in an email to CTV News Toronto.

“We work with law enforcement, industry and other levels of Government to discuss ways of monitoring safety for all commercial vehicles, including tow trucks.”

With files from Beth Macdonell.