Guns, drugs and cash were on display at Toronto Police Headquarters as officers detailed three investigations that allegedly led to the seizures of more than a dozen guns over the last two months. 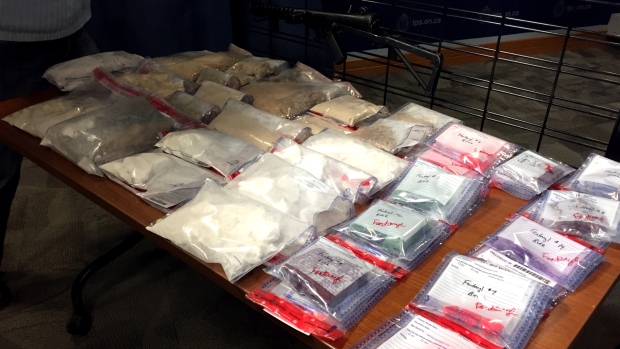 “In addition to the obvious significance of the firearms seizures, when you take the combined total of these three investigations, our drug team have removed what could have amounted to $3.7 million worth of illicit drugs from our streets, along with just under $400,000 in cash,” Insp. Don Belanger told reporters.

Most of the seized guns were loaded with ammunition when officers found them, Belanger said.

“One less gun helps prevent an opportunity for a street gang member to use it and invoke harm in our city,” Toronto Police Chief Mark Saunders said. “You can see that this is the lifeblood of street gang culture.”

“They’re in it for the money and any time we can disrupt that money, we help deter more people from wanting to get into the industry and also we can help save lives.”

The first investigation was a continuation of Project Sparta, a case that was unveiled earlier this year, in which three people were charged and 68 kilograms of cocaine were seized, Belanger said.

Project Sparta 2 culminated in a series of warrants on Sept. 20 that Belanger said produced a 12-gauge shotgun, several kilograms of illegal drugs and “just over $190,000 in cash that we allege to be proceeds of criminal activity.” 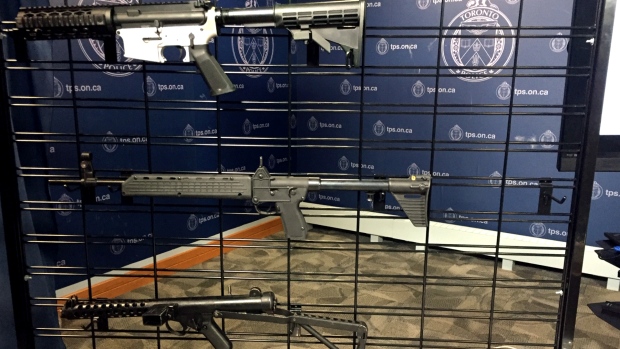 Four people were arrested on various gun- and drug-related charges. All of them are out on bail, Belanger said.

Next came Project Topside, which Belanger said was prompted by the investigation into a man who they believed to be moving several kilograms of cocaine on Toronto-area streets. Investigators soon realized that guns were also being trafficked, Belanger said.

While carrying out search warrants at the end of October, police allege they found a secret compartment in the trunk of a Ford Escape that was left unattended in the underground parking garage of a Scarborough apartment building.

Inside that “sophisticated trap,” investigators found 11 guns and about $1.7 million worth of illegal drugs, including powder cocaine, crack cocaine, heroin and fentanyl, Belanger said. Another gun was found in a separate location, police said, in addition to more than $200,000 cash.

“I can advise that the vast majority of cash — again, I’m talking $200,000 — was seized from one accused individual when he was arrested while walking to his vehicle,” Belanger said. “We allege that all of this money is proceeds from gun and drug sales.”

Two Stouffville brothers — Imran Maragh, 31, and Kadean Maragh, 28 — each face more than 50 gun- and drug-related charges as part of Project Topside. They remain behind bars awaiting their next court appearances, while the other four accused in the investigations discussed Wednesday are out on bail, Belanger said. 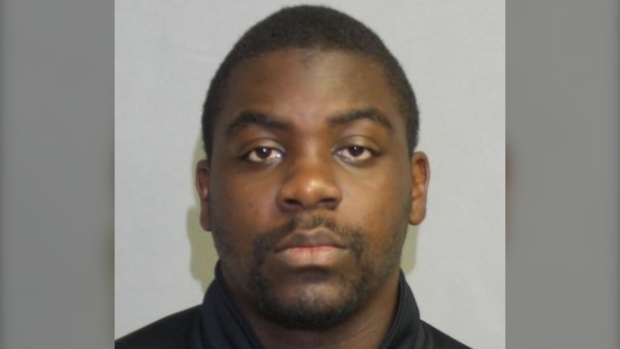 Anyone with information about Reid’s whereabouts is asked to call investigators at 416-808-6100. Anonymous tips can be left through Crime Stoppers.

The third case was carried out by officers who believed they would only be seizing several ounces of cocaine, Belanger said. Instead, they allegedly found more than six kilograms of cocaine believed to be worth about $600,000 on the street. One man was arrested.