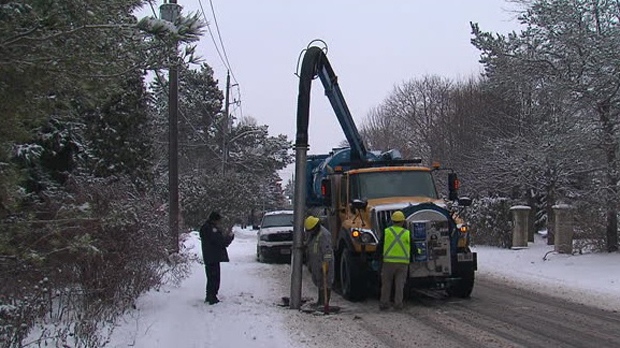 A police officer watches as workers draw a vacuum into a sewer near the home of Barry and Honey Sherman.

The family of Barry and Honey Sherman have hired a pathologist to conduct a second autopsy on their bodies, CTV News Toronto has learned.

The billionaire founder of Apotex Pharmaceuticals and his wife were found dead on Dec. 15, in the basement pool area of their North York home. Sources tell CP24 the pair were found hanging.

The coroner said the cause of their deaths was ligature neck compression. Homicide investigators have taken the lead in the investigation, though they are still classifying the deaths as suspicious.

Police were in the neighbourhood Saturday using trucks with vacuum hoses to search the sewers for possible evidence.

Last week, a car was removed from the Sherman’s home by police.

Along with another autopsy, the Sherman family has also hired a private investigator to look in the couple’s deaths.

Neighbours of the Sherman’s along Old Colony Road, in the Bayview and 401 area, told reporters Saturday the continued police activity on the street is unsettling to them.