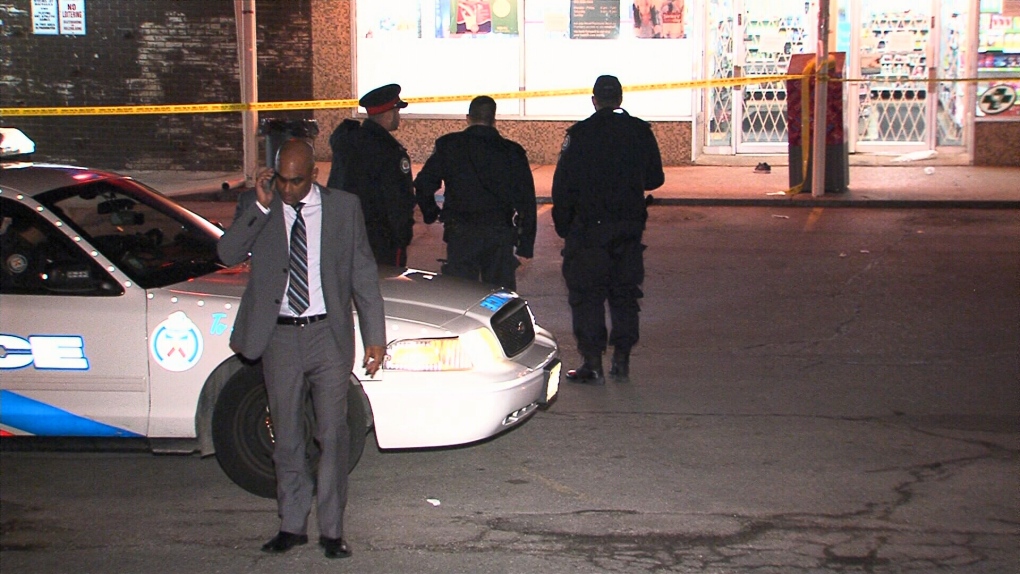 The scene were Jamal Roache, 26, was shot in the Keele Street and Sheppard Avenue area on Thursday, Oct. 30, 2014.

Toronto Police have released a video showing the shooting that killed a man late Thursday night in a strip mall in the city’s north end.

It happened just outside a drug store in a retail complex at 3306 Keele Street, near Sheppard Avenue.

In the video, compiled from surveillance camera footage, a dark blue or black Honda Civic is seen stalking Roache. A man jumps out of the passenger’s side of the car, unleashes a torrent of gunfire, and then runs back to the vehicle, which speeds off.

“Fortunately, there was no one in the stores,” he said.

One suspect is described as wearing a black and grey hoodie, dark shoes with white soles, and a toque. Race and age are unknown.

Although Roache was “known to police,” it’s not clear whether the homicide was gang-related.

“Jamal has a lovely mother who I spoke to last night, who you can imagine is heartbroken,” said Ryan.

Ryan is asking the driver of the car to come forward. “I think he’s in (the) best position legally right now. Contact a lawyer or call me directly,” he said. “Perhaps he or she was in shock and continued driving when the shooter got into the car.”

Ryan also appealed to the community for help identifying the shooter.

“Everybody knows there are surveillance cameras in different places,” he said. “An act like that, I don’t think they care.”