TORONTO -- Durham Regional Police have released aerial footage of an hour-long chase after a carjacking suspect was pursued and tracked down by police last night.

A woman was sitting in her vehicle in a parking lot at Harmony Road North and Taunton Road East in Oshawa when a suspect approached her.

Police said the woman was assaulted before her vehicle was stolen.

Officers located the vehicle travelling east towards Clarington and eventually tracked it down at a gas station at Highway 35 and 115 in Newcastle.

However the vehicle took off on Concession Road 4 when police approached. Night-vision video from the pursuing helicopter shows the stolen vehicle smash through an object before taking off at a high rate of speed. 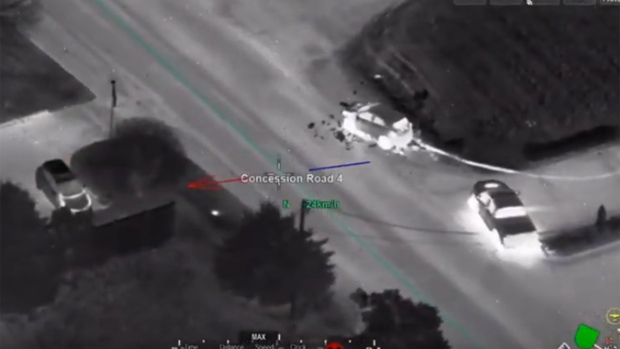 Police pursued the vehicle on the ground for a distance but were eventually called off while the chopper continued its pursuit.

A few minutes later, the helicopter captured the stolen vehicle crashing while trying to take a bend at around 170 kilometres per hour.

The suspect is then seen getting out of the vehicle, fumbling through some woods and then alternately walking and running away.

The helicopter’s night-vision camera tracks him as he tries to hide behind a house and then crouches down in some woods before trying to run away into a wooded area. 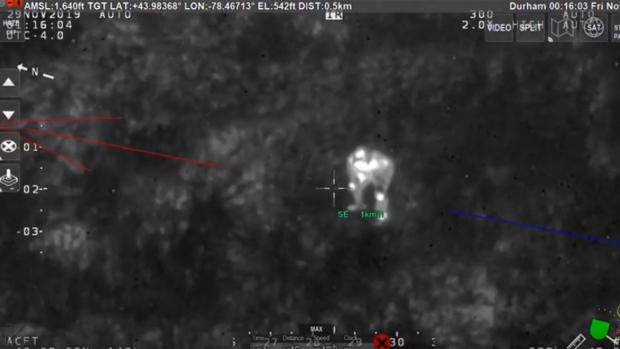 Officers on foot, along with the K-9 Unit eventually caught up with the suspect just before 12:30 a.m. on Friday and took him into custody.

Police said 33-year-old Kyle Grieder of Cobourg has been charged with robbery, flight from police, dangerous operation, failing to comply with recognizance, six counts of operate conveyance while prohibited and driving while under suspension.

He was held in custody pending a bail hearing.