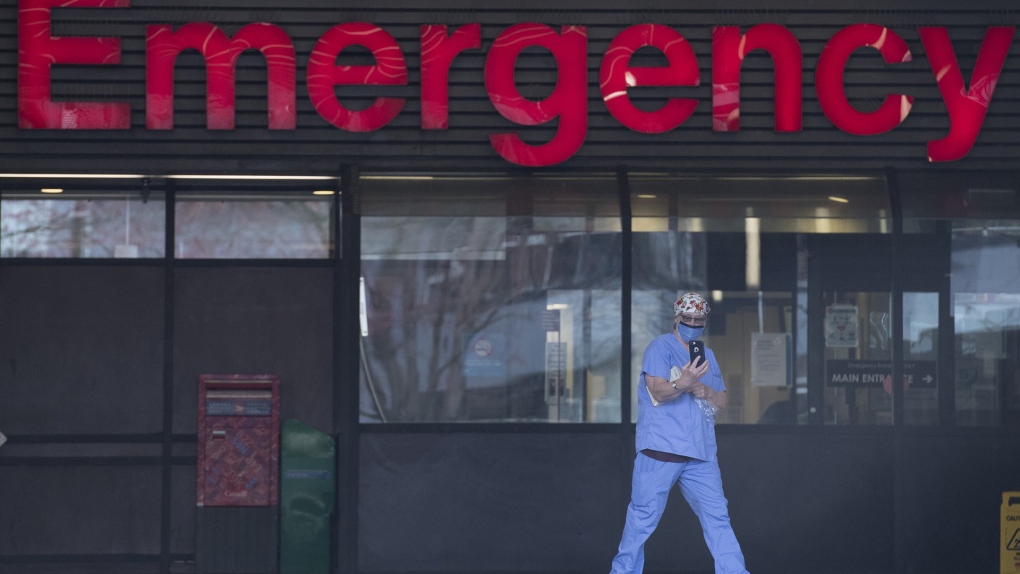 A health care worker is seen outside the emergency department of the Vancouver General Hospital in Vancouver on March 30, 2020. Hospitals facing urgent COVID-19 needs are banding together to close funding "gaps" for their institutions and embattled health-care workers. Dubbed "The Frontline Fund," the national campaign seeks donations on behalf of more than 100 institutions across the country for supplies, staff support and research. Organizers say the money would help hospitals source personal protective equipment and ventilators, fund drug trials and vaccine research, and provide mental health support to exhausted staff. Ten per cent of funds will also go towards the northern territories and Indigenous health. THE CANADIAN PRESS/Jonathan Hayward

TORONTO -- Ontario’s top doctor is warning young people who may be getting casual about protecting themselves from COVID-19 that he’s getting reports of patients returning with prolonged health issues.

Dr. David Williams said Thursday that Ontario is seeing a spike in cases among the 20 to 39 age group, who he believes may be less stringent about public health measures.

Williams said he has received anecdotal reports from physicians and medical groups in Ontario that patients in the 20-39 age group, who only had mild COVID-19 symptoms, are returning to the doctor after recovering with prolonged "effects and issues."

"I wouldn’t be too casual about not caring about getting infected because it's a new disease and we still have a lot to learn," Williams said. "We're starting to see some cases where people who had a relatively insignificant case of COVID-19 later on are having some effects and issues.”

Williams said it's not known how many young patients are complaining of prolonged symptoms.

"Just because you may be young and think the kind of condition is just going to be like a flu like illness for a few days, a bit of shortness of breath … You don’t know what the longer term aspects are,” he added. "I'm not saying I know something will definitely happen, (but) I've heard some anecdotal reports."

In Ontario, there have been 11 people between the ages of 20 and 39 who have died with COVID-19. Earlier this week, the province reported its first fatality in a person under the age of 19 with COVID-19, but said the coroner was investigating whether the disease was the cause of death.

"Prevention is still important," Williams said. "Being casual and frivolous on this is not a good thing to do."

"Wait until we have all the science."