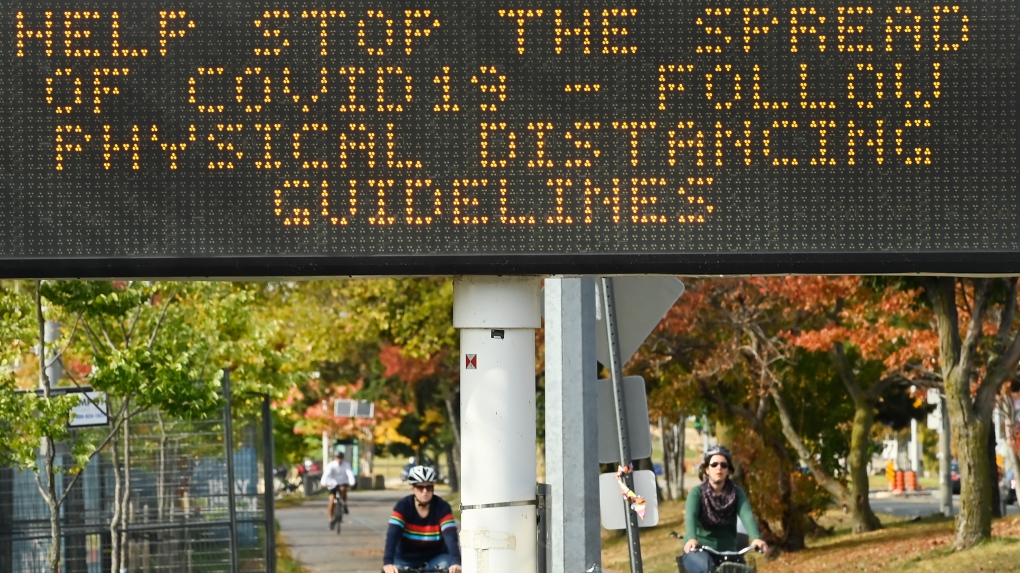 People get exercise along the lakeshore path on Lake Ontario on a fall day during the COVID-19 pandemic in Toronto on Tuesday, September 29, 2020. THE CANADIAN PRESS/Nathan Denette

The 566 new infections represent a decrease over Saturday's total when 653 cases were reported.

The province also reported seven new COVID-19-related deaths in the last 24-hour period. However, the Ministry of Health said that three of those deaths, recorded by Toronto Public Health in the "spring or summer," are only now being recorded as part of a “data review and data cleaning initiative."

As well, Ontario logged  534 more cases it now considers to be resovled.

The news comes as the province’s 153 COVID-19 assessment centres close their doors to walk-ins, a move Premier Doug Ford said was “absolutely necessary” in the face of staggering lineups and test processing backlogs.

Starting Tuesday, patients with COVID-19 symptoms will be required to contact their closest testing centre and speak to a nurse before making an appointment for a swab.

“It might take a few days to schedule your tests at the start, but we are working around the clock to keep those times as low as possible,” Ford said on Friday.

Pharmacies, which are currently open for asymptomatic testing for priority groups, also operate on an appointment-only basis. The province said it plans to expand the number of pharmacies where people can get tested.

According to the province’s daily epidemiologic summary, 247 of the new infections were reported in people between the ages of 20 and 39. That age group now accounts for 19,016 lab-confirmed infections, the most of any age group in Ontario.

Thirty-one new cases were reported in people 80 years of age and older.

Most of the new cases added Sunday were reported by just three regions in Ontario.

At least five other public health units are also reporting new case numbers in the double digits, including York Region, Halton and Niagara.

The province said 169 patients are currently in an Ontario hospital seeking treatment for COVID-19. However, health officials said approximately 35 hospitals did not provide patient data, which they believe may lead to an increase in the number of hospital admissions recorded over the next few days.

The Ministry of Health did not provide data regarding the number of patients currently being treated in an intensive care unit nor those currently breathing with the assistance of a ventilator.

Nearly 4.1 million tests for the disease have been processed since the beginning of the pandemic.

With files from Miriam Katawazi and Colin D'Mello.