TORONTO -- New COVID-19 modelling released by the Ontario government on Wednesday forecasts the province could reach 1,000 new infections per day by mid-October but Premier Doug Ford said it's not time to roll back to Stage 2.

According to the data released on Wednesday, new COVID-19 cases in Ontario are doubling approximately every 10 to 12 days.

"If things grow as we're anticipating, we will see a dramatic increase in the number of cases," Dean of the Dalla Lana School of Public Health at the University of Toronto Adalsteinn Brown said. "Likely over 1,000 cases within the first half of October a day, which is a remarkably high surge."

According to the provincial government, when there are less than 150 COVID-19 patients being treated in intensive care in Ontario hospitals, the province can "maintain non-COVID capacity and all scheduled surgeries."

Once that number rises above 150 it becomes harder to support non-COVID-19 needs, the government said. Once it exceeds 350 people, it becomes "impossible" to handle.

The government provided three scenarios, based off other experiences with COVID-19 around the world, to forecast how many patients will be admitted to intensive care during the second wave.

Victoria, Australia was used as the high scenario, while Michigan was used as the medium scenario. The low scenario was based off Ontario's first wave, but with a younger population being infected.

While the low scenario does not exceed 150 people in intensive care, the medium scenario creeps up to about 250.

If Ontario followed Victoria, Australia's spike in COVID-19 cases, which sent much of the state into one of the world's strictest lockdowns, intensive care admissions would surge to nearly 600, according to the modelling.

"Where we're modelling right now suggests that we're starting to get closer to where Victoria was," Brown said. 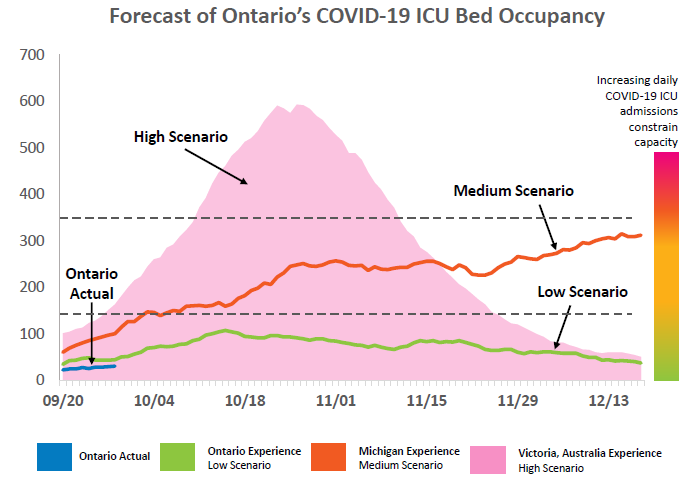 The modelling does not take into account the government's recent tightening of public health measures, which include slashing social gatherings, closing strip clubs and tougher restrictions on bars and restaurants.

Ontario's Chief Medical Officer of Health Dr. David Williams said Wednesday the province will "have some more actions coming" to flatten the second wave of the disease. Williams said in order to lessen the effect of the second wave, residents must again strictly follow public health rules.

"We need to pull up our socks," he said. "We can impact the curve."

But despite mounting pressure from some health-care professionals to move Ontario back to Stage 2, Ford said the province isn't ready for that yet.

"We aren't rolling back today, not saying that's never going to happen, but that's not the conversation we are going to have today," Ford said.

As of this week, more than 17,500 Ontarians between the ages of 20 and 39 have contracted the COVID-19. There were 14,632 people between 40 and 59 years old who have tested positive since the beginning of the pandemic.

A total of 6,288 people over the age of 80 got infected with the virus and more than 4,100 people 19 and under also contracted the disease.