Ontario forecasts up to 15,000 COVID-19 deaths with health measures in place

TORONTO -- Ontario is forecasting that between 3,000 and 15,000 people in the province will die from COVID-19 with health measures that are already in place.

Without any public health measures, the worst-case modelling forecasts up to 100,000 deaths.

"That is not what we believe will happen," Dr. Peter Donnelly said at Queen's Park on Thursday. "That is why we needed to do all the things we have done thus far and why we need to continue."

"That is our closest estimate."

The Ontario government says, with the current physical distancing measures in place, that 1,600 people will die from the virus by April 30. Without any measures, 6,000 people could have been dead by the end of the month.

The model forecasts that by April 30 there will be 80,000 cases of COVID-19 in Ontario. It suggests that without the current health measures in place, there would be 300,000 cases by the end of the month.

The modelling predicts the COVID-19 pandemic could last between 18 months and two years.

Donnelly stressed that these projections are not set in stone and will be updated as they recieve new information.

"How this outbreak unfolds is in the hands of the public, in effect in all of our hands,” Donnelly said. “We can change the outcome of the province by staying at home and physically distancing ourselves from others.”

Donnelly said that in a bad year, there are about 1,500 deaths linked to the seasonal flu in Ontario.

"Now when you think that the mortality of this disease is up to 10 times higher and when you remember that we have no vaccine, no specific treatment, and this disease is entirely new to the population, then suddenly this figure of 15,000 becomes entirely logical."

Speaking an hour after the projections were released, Ontario Premier Doug Ford said the numbers "tell a story" about the province's fight against the virus. 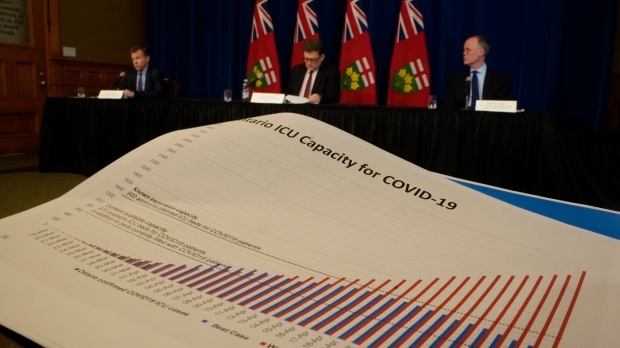 "The reality is the early chapters of our story have already been written," Ford said. "There are some things out of anyone's hands but what matters is the ending of our story is still up to us."

"If we work together, we can write the last chapter of our story because these forecasts are projections and they can change with your actions and with the government's actions."

"At the end of this month, we could see as many as 80,000 people in Ontario inflicted with this terrible virus. Over 1,600 people could be dead by the end of April. That's 50 per day, or two people every hour."

"Each one could be your brother, your sister, your mother, your father, your grandparents. This virus can hit anyone of you and your loved ones." 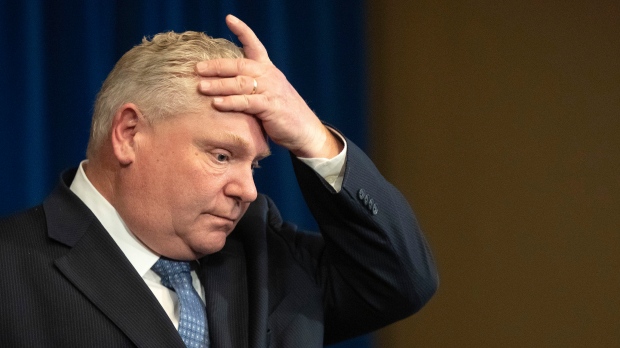 Ford said the models indicate that efforts to flatten the curve of the virus in Ontario are working and that thousands of lives are being saved.

"None of those things are worth as much as a life. So to everyone in Ontario, we need to listen. We need to take action."

Meanwhile, the province reported 462 new cases of the virus on Friday, up 16 per cent from the day before. The total number of cases currently stands at 3,255.

There have been 67 deaths reported in the province by health officials to date.

The government has based its recent self-distancing advice to Ontarians on the provincial modelling released on Friday. The province previously refused to share the data claiming that the models could lead to public panic.

Most Canadian health officials have taken a different approach from their counterparts in the United States, who released dramatic predictions on the potential outcome of the pandemic weeks ago.