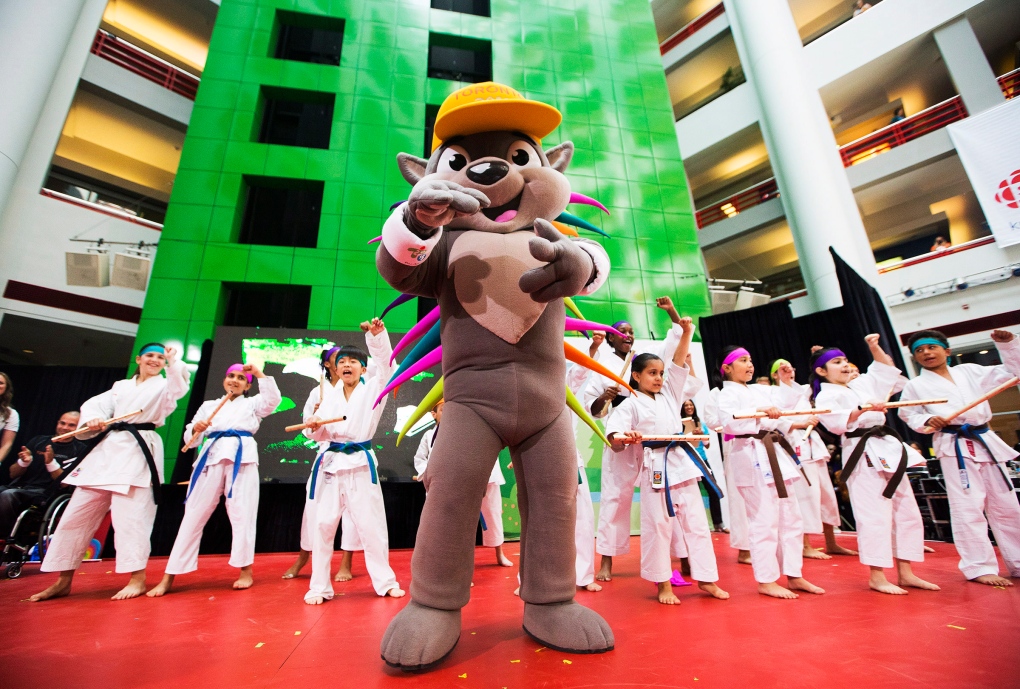 Karate athletes help unveil Pachi the Porcupine as the new mascot for the Toronto 2015 Pan Am/Parapan Am Games in Toronto on Wednesday, July 17, 2013. (The Canadian Press/Michelle Siu)

TORONTO -- Ontario's Liberal government cannot say what the budget is for security and transportation at the 2015 Pan Am Games in Toronto, Tourism and Sport Minister Michael Chan admitted Thursday.

"We don't have a finalized number on that," Chan admitted to reporters after ducking Opposition questions in the legislature.

"Look at the Vancouver (Olympics), where they had one number come out on security and they had to revise it about four or five times, so I don't want to speculate."

The final bill for security at the 2010 Vancouver Olympics came in at just under $1 billion, almost five times the original budget.

The Ontario government was already under fire for admitting the $700 million cost of building the athletes' village for the Toronto games is not included in the $1.4 billion budget, and the Opposition accused the Liberals of trying to hide the final bill.

"They've decided they're going to have that $1.4 billion budget to cover a certain amount of things, and then any time anything comes up that's going to inflate that budget, they're going to put it somewhere else and not be honest with the public about what these games are really going to cost," said PC critic Rod Jackson.

The Progressive Conservatives said the Liberals wasted over $1 billion cancelling gas plants to save seats in the 2011 election, and the fact they still don't know the budget for security and transportation at the Pan Am Games is appalling.

"For him to not be able to answer what the security and transportation costs are going to be for the Pan Am Games is terrifying to me," said Jackson. "This is a minister who doesn't have a grip, is a disaster on this file, and he needs to step down."

The New Democrats also lashed out at Chan for refusing to say what the government has budgeted for security and transportation at the international sporting event.

"It's another example of a government claiming it wants to be open and transparent and not doing the basics like letting people know what the costs are at the games," said NDP Leader Andrea Horwath. "You can't claim you want to be transparent and open and then not provide figures and information when asked by the opposition."

But Chan was insistent that he did not want to provide a budget figure now only to have to change it later on, and he lashed out at the Conservatives for saying the security bill alone will be hundreds of millions of dollars.

"Mr. Rod Jackson mentioned a lot of numbers but to me those are rubbish numbers, fantasized numbers, because at the moment I don't have a number," he said.

Jackson said he doesn't know if the Liberals have a budget figure for security and transportation that they don't want to release or if they truly don't have a budget yet.

"Either way, it's appalling and terrifying that this government doesn't have a grip," he said.

The government had to tell officials with the TO2015 Pan Am committee to tighten the rules on expenses after some questionable claims by executives, who are eligible for a total of $7 million in bonuses for staying on the job until the event is over.