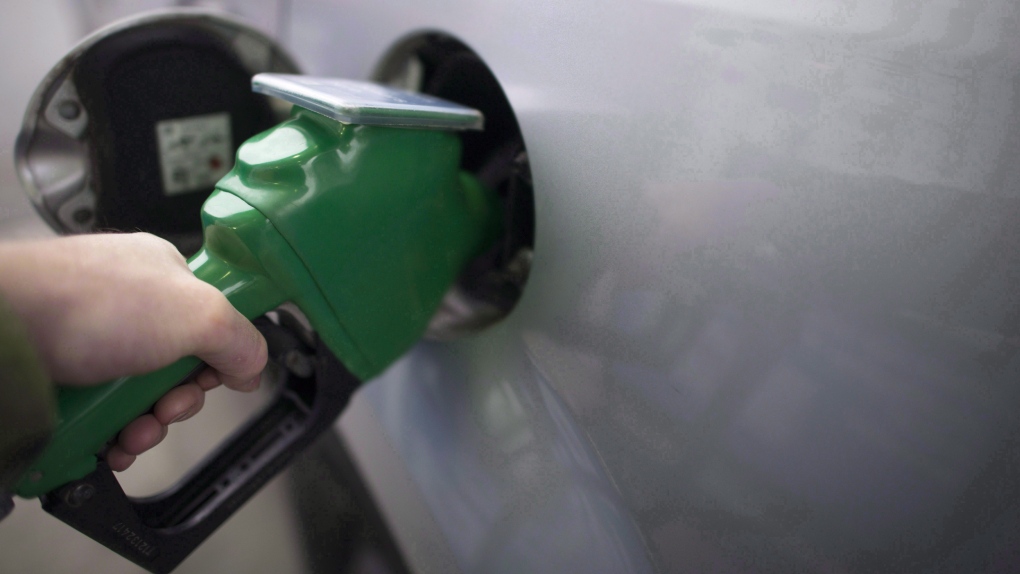 A vehicle gets gas at a gas station in North Vancouver, B.C., Wednesday, Jan. 20, 2016. THE CANADIAN PRESS/Jonathan Hayward

TORONTO -- Forcing gas station operators to display Ontario government stickers on the federal carbon tax violates their rights and freedoms, the province's chamber of commerce said Thursday as it asked the Progressive Conservatives to reverse their decision.

In a letter Thursday to the Energy Minister Greg Rickford, chamber president Rocco Rossi said the group's members are concerned about the "political nature" of the decals, which were unveiled earlier this month as part of the Tory government's fight against the federal levy.

"Our members -- including gas station operators -- have expressed concerns regarding the political nature of the stickers, viewing them as a violation of their rights and freedoms," Rossi said.

Ontario has introduced legislation that requires stickers -- in English and French -- to be put on gas pumps showing that the tax has added 4.4 cents a litre to the price of gasoline and that will rise to 11 cents per litre by 2022.

The government said last week the stickers will cost taxpayers approximately $5,000 to print 25,000 decals but that does not cover the cost to distribute them to the province's 3,200 gas stations.

Gas station operators who don't display the government-mandated stickers could be subject to fines of up to $10,000 per day.

On Thursday, Rossi called on the government to scrap the section in the legislation which mandates the stickers.

"This initiative is an example of unnecessary red tape: it is both a new administrative burden and an increased cost to business thanks to the punitive and outsized fines for non-compliance," he said in the letter.

Rickford defended the stickers, saying in a statement that the federal carbon tax will have a negative impact on every one in the province.

"Ontario families have the right to know exactly what the Trudeau carbon tax costs them every time they fill up at the pump," he said in a statement. "The carbon tax will kill jobs and raise the price of nearly everything across our province, hurting every member of the Ontario Chamber of Commerce."

The letter is a rare example of the chamber publicly disagreeing with the Ford government on policy since it came to office last year. Rossi points out that the chamber has supported the Tories on a number of pieces of legislation and the government's ongoing work to reduce Ontario's deficit and debt.

The carbon tax is expected cost to a typical household $258 this year and $648 by 2022. Residents of provinces with the tax will be getting rebates on their income tax returns that start at $128 annually and increase for people with spouses or dependents at home. The federal government says a family of four in Ontario would get $307 this year.

Ontario is one of four provinces, including Manitoba, Saskatchewan and New Brunswick, where Ottawa imposed the levy because they opted not to impose their own pricing schemes on carbon emissions.