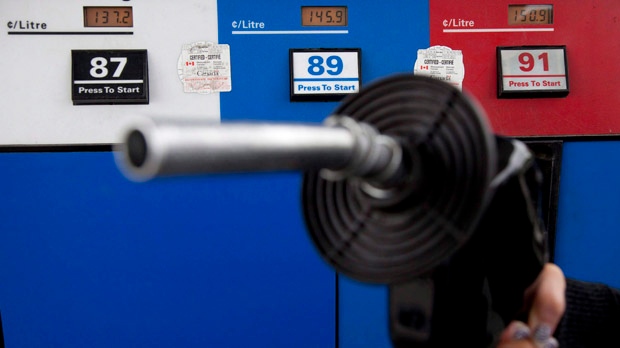 An environmental group is lobbying for Canadian municipalities to pass bylaws that would require warning labels on gas station pump nozzles. (Jonathan Hayward / The Canadian Press)

The Progressive Conservatives have unveiled new warning signs aimed at alerting drivers to the cost of the federal carbon tax – which has raised the price of regular gasoline by 4.3 cents a litre.

Buried in a budget bill introduced on Thursday, the Ford government warns that gas station owners could be fined between $500 and $1,000 a day if they don’t prominently display the sticker.

The fines for corporations are even steeper at $5,000 to $10,000 a day if inspectors find they’re not complying with the rules.

Details about the fines were nowhere to be found in the budget document distributed on Thursday. Instead, it was placed in accompanying legislation tabled the same day.

The NDP called the threat a “new low” for the premier and urged the government to cancel the sticker campaign.

Officials in the Ministry of Energy expect to have the stickers ready by the summer and say the province will foot the bill for the notices.

The federal government has said the tax is necessary for Ontario, Saskatchewan, Manitoba and New Brunswick because they do not have their own carbon pricing system in place to help reduce emissions. Other provinces have implemented plans of their own.

The Liberals have said most of the money collected through the tax will be returned to Canadians in an income tax rebate. In Ontario, the average family of four is expected to get just over $300 in 2019.

The Ford government has pledged to spend $30 million dollars to fight the federal carbon tax, which will includes a court challenge set to begin later this month.