No more charges in 'Nobody' G20 case: SIU 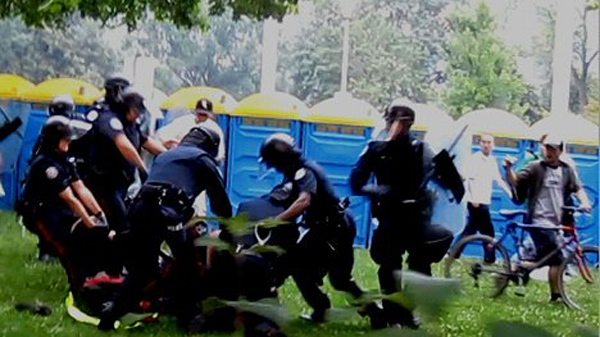 No additional officers will be charged in a G20 police brutality case involving a complainant named Adam Nobody, the director of the province's Special Investigations Unit said Monday.

"I cannot form reasonable grounds that any identifiable officer was involved in excessive use of force against Mr. Nobody in this aspect of the investigation. This investigation, therefore, is closed," Ian Scott said Monday in a news release.

Three officers had been under investigation in this phase of the case.

The SIU recommended in December 2010 that Toronto Police Const. Babak Andalib-Goortani be charged with assault with a weapon for allegedly attacking Nobody (not his birth name) on June 26, 2010.

Nobody was present at a Queen's Park G20 summit protest when riot officers moved in -- something precipitated by a riot in the downtown core near the summit's secure zone. The Queen's Park venue was a designated protest zone.

The SIU originally concluded in late November 2010 that it didn't have enough evidence to charge any officers. It originally designated two officers as subjects of the investigation and eight as witnesses.

Then a YouTube video emerged showing Nobody being swarmed by police. The victim had to be treated for a fracture below his right eye.

Police Chief Bill Blair challenged the video, saying it had been altered.

Videographer John Bridge said the camera had been turned off for a few seconds. He presented the SIU with his original video, which had much higher resolution than the YouTube version.

As a result, the SIU re-opened its investigation of the Nobody case. It interviewed 12 officers.

"They were shown the Bridge video of the incident, and stills taken from other videos. None were able to positively identify themselves as being depicted in the videos, nor could they identify the other involved officers," Scott said.

Despite that, the SIU felt it had enough evidence to identify Andalib-Goortani, leading to charges being laid.

Andalib-Goortani's case is still before the courts. No allegations have been proven against him.

The SIU continued to pursue the case, trying to identify three other officers alleged to have used excessive force against Nobody. But ultimately, the investigation went nowhere.

"No individual, police or civilian, can point to any of the three remaining subject officers under investigation depicted in the videos or still photographs striking Mr. Nobody, and make a positive identification," Scott said.

The SIU is an arm's-length agency that investigates when people are injured or die as a result of contact with police in Ontario. It also investigates allegations of sexual assault against officers.