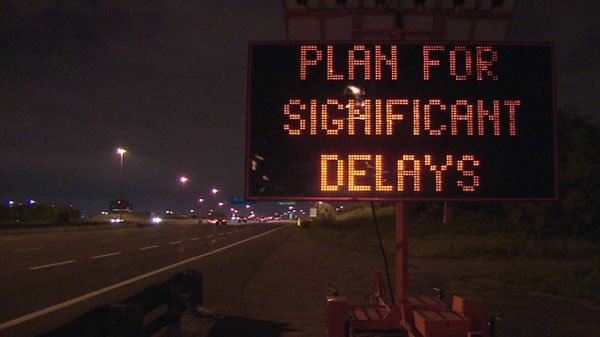 A sign warns drivers coming into the city on 400-series highways of traffic delays during the G20 conference in Toronto.

OTTAWA - A First Nations rights group is still planning highway blockades around Toronto despite an apparent warning from Canada's spy agency and heavy security around the G20 meeting of world leaders.

The blockades are planned for either Highway 400 or Highway 403 next Thursday to tell the world that, "everything is not OK in Canada for native people," said Red Power United spokesman Harrison Friesen.

Plans have been in the works for the actions since April.

An Aboriginal Peoples Television Network report that CSIS warned the group that blockades around Toronto could be met with resistance by foreign security services has only increased support, Friesen said.

"(Warnings from CSIS) have not had a negative affect on us," said Friesen. "After the CSIS issue, more support was shown for us."

The 403 runs from Woodstock, Ont., to Mississauga, Ont., just west of Toronto, and Highway 400 runs north between Toronto and Barrie, Ont.

A blockade is also planned on the Trans-Canada Highway the same day near Thunder Bay, Ont.

World leaders are gathering in Toronto on June 26-27 for the G20 summit, which will be preceded by the G8 summit in Huntsville, deep in Ontario's cottage country, from June 25-26.

It's expected the leaders will arrive at Toronto's Pearson International Airport and travel by helicopter to the G8, and by car along Highway 427 to the G20 in Toronto.

The blockades would not interrupt those plans.

However, a motorcade making the nearly three-hour trek to Huntsville would likely travel along Highway 400.

Friesen said plans are to hold the "non-violent" blockades for as long as it takes to have their message heard.

"We want the Stephen Harper government to realize that we will not back down," said Friesen. "We will only resist if (police) threaten violence against us. We want these to be peaceful blockade demonstrations and nothing more than that.

"I will not allow any of our people to be harmed on that day."

Friesen said he expects between 20 to 30 men and women to participate in the Toronto-area blockades.

Michael Boucher, from Fort William First Nation, Ont., said he expects about 200 people to turn out for a planned five-hour blockade on the Trans-Canada Highway near Thunder Bay. He is meeting with the Ontario Provincial Police to inform them of their plans.

"I have two children and I was thinking that by the time my kids are older, with they way things are going, their rights are going to be diminished," he said.

"I am fighting for my children's rights and my family and friends."

In an exchange captured on video by APTN National News, a person that the network says is a CSIS agent warns Friesen his group could face a reaction from foreign security agencies if they blocked Highway 400.

"I will tell you that straight up, because there's going to be people travelling there from all over the world and different countries do not have the same perspective on activists as our county does," the woman says.

"There's other forces that are from other countries that will not put up with a blockade in front of their president."

CSIS would neither confirm nor deny that the meeting took place, citing security and privacy reasons. (APTN)