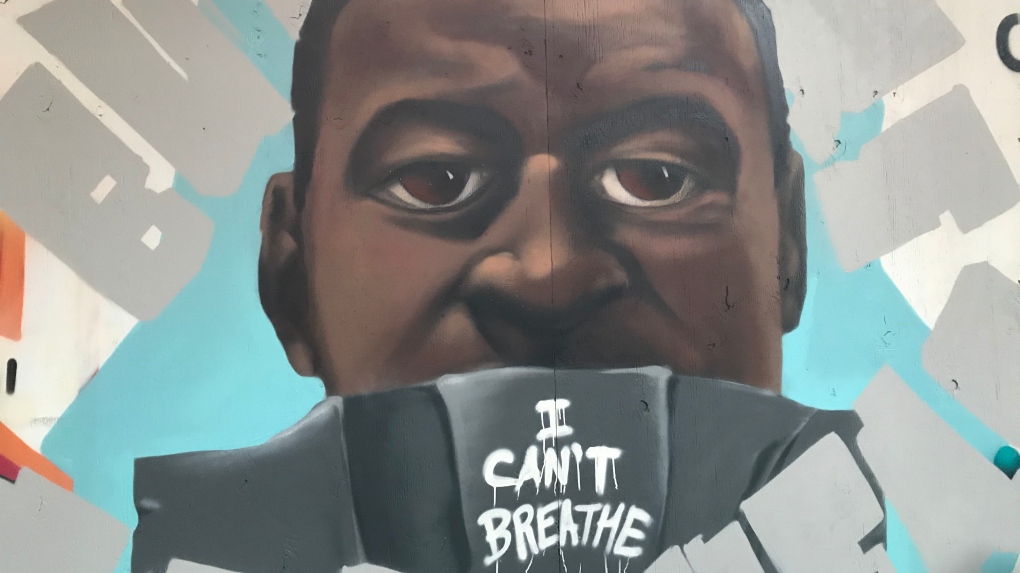 A mural of George Floyd is painted at Toronto's graffiti alley. (Beatrice Vaisman)

TORONTO -- A mural of George Floyd has been added in Toronto's graffiti alley on Saturday as artists came together to paint in support of the Black Lives Matter movement.

About 40 graffiti artists from the Greater Toronto Area and Montreal converged in an alleyway near Spadina Avenue and Queen Street West to pay tribute to Floyd and other Black figures through their artwork.

Floyd was killed in Minneapolis last week after being pinned down by a police officer for almost nine minutes. His death sparked numerous protests in the U.S. and around the world, including in Toronto.

Jessey Pacho, who co-organized the "graffiti jam," said the event is their way to speak out against the oppression they are seeing.

"It came together really quickly, really smoothly, but (it) literally evolved from a group chat a couple of days ago to what we see before us today," Pacho said.

One of the murals he created with another artist depicts a black panther wrapped around a globe, which he said is like a mother protecting her cubs. Surrounding it is the message, "All power to the people," a slogan used during the Civil Rights Movement.

There were also murals of Martin Luther King Jr., and Breonna Taylor, the 26-year-old woman who was killed by Kentucky police in March.

A mural of 29-year-old Regis Korchinski-Paquet, who died after falling from her apartment balcony in High Park last week, was also painted in the alleyway.

Toronto police officers were inside her apartment at the time of her death. It is now the subject of a probe by the Special Investigations Unit, Ontario's police watchdog.

Pacho said the murals are a testament to how communities thrive when communities come together.

"I think it's amazing to see the community come together. And not just our community of artists, but just people of all races, nations, and creed come together to speak out against such atrocities that we're seeing in the world today," he said.

The event comes after two anti-Black racism protests, where thousands of people marched through the streets of downtown Toronto on Saturday afternoon.

Moises Frank, who co-organized the event with his friend Pacho, said the idea came after seeing the black posts on Instagram during Blackout Tuesday, a social media movement organized by representatives of the music industry in support of the Floyd protests.

"I think as a graffiti artist in the community for like many years, I felt like it was powerful to see so many people come together and, and say, now is the time to say something about this," he said.

Frank noted that he has never seen a "graffiti jam" that brought different people together, saying that the event is "greater than graffiti."

"We're coming together collectively and using our voices and our skills to say something that it's really important," he said.

Frank noted that they are collecting donations for the Black Lives Matter Movement.