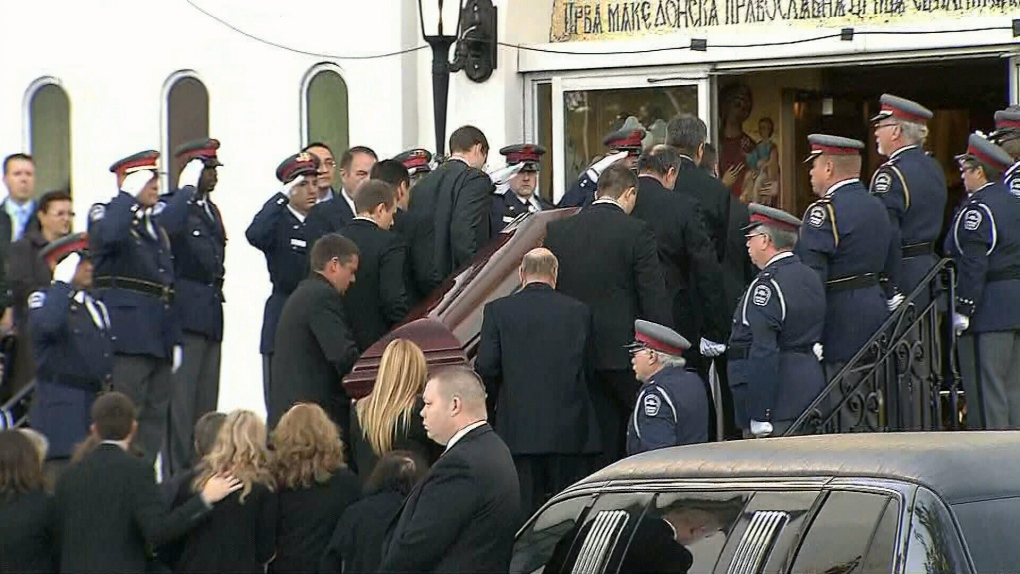 A large crowd of friends, family and colleagues gathered this morning for the funeral for Peter Pavlovski, 49, on Wednesday, Sept. 19, 2012.

TORONTO -- A Toronto transit worker who died on the job was remembered Wednesday as a devoted family man whose integrity and generosity inspired those around him.

A large crowd of friends, family and colleagues gathered for the funeral for Peter Pavlovski, 49, who died Friday after being hit by a service train just north of the city.

The married father of three was a Toronto Transit Commission employee for 22 years and had just celebrated his 20th wedding anniversary the week before his death.

His niece told the packed east Toronto cathedral, and those who watched the service on large screens in a second hall and outside, that her uncle was "someone you could look up to every day."

"We always knew that he was loyal, a very loyal, dedicated family man that worked extremely hard and had that Pavlovski work ethic at everything he did," Melanie Pavlovski said.

She choked up as she recalled her uncle's "distinct and contagious smile" and his close bond with his large family, whom he often brought together over lavish and delicious meals.

"We also learned in the past couple of days about how much he was respected and loved by his colleagues at the TTC," she said, noting many considered him part of their "work family."

A large number of TTC workers were among the mourners, many of them wearing black armbands -- a tribute to a colleague killed in the line of duty.

TTC buses, streetcars and subways came to a halt at 10 a.m. and paused for a minute to honour him.

"There's a real sense of trauma, a real sense of shock, but I think today will translate really into a sense of pride that we knew him and that we loved him," he said outside the church.

Pavlovski was supervising a crew of seven workers on an elevated track area when he was struck by the southbound train just before 5 a.m.

A second man was also hit but suffered only minor injuries. Toronto police, the Ontario Ministry of Labour and the transit commission have all launched investigations into the incident.