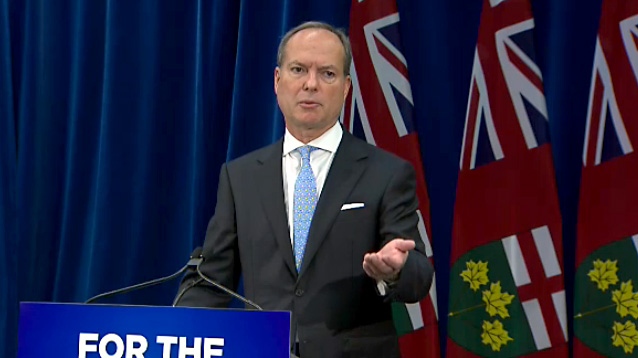 Treasury Board President Peter Bethlenfalvy speaks to reporters about the provincial government's finances on September 25, 2018.

Thousands of Ontario’s civil servants will be taking an exit package offered by the Progressive Conservative government – a move that is expected to eventually save the province $215 million a year.

Treasury Board President Peter Bethlenfalvy says of the 3,300 employees who submitted an application for a package, 2,400 were approved, representing roughly four per cent of the OPS.

“All these moves are voluntary,” Bethlenfalvy said at a news conference held Thursday. “This gives us a lot of flexibility to focus resources in areas that are a priority for this government. We have a number of initiatives on the way.”

While the government had to spend $190 million on the exit packages, Bethlenfalvy is projecting the province will save $215 million per year, starting in 2021.

Bethlenfalvy also indicated that agencies that receive provincial funding may also be asked to offer similar buyouts in the years ahead.

“We want to take the learning from this and work with our transfer partners and our broader public service to see if elements of this work for their organizations.”

Bethlenfalvy says preserving the “institutional memory” of the civil service was one of the main reasons why 900 employees who applied for a buyout were rejected.