The family and friends of a 34-year-old woman who died in a fiery crash on the Queen Elizabeth Way last week are trying to make sure their final memories are not those of tragedy—instead they hope to honour her love of art and passion for saving the planet.

Niagara-resident Elena Kulikova was driving her car in the eastbound lanes of the QEW in Oakville around 11 p.m. on Thursday when her vehicle was involved in a collision with a tractor trailer. Police said her car became pinned between a concrete barrier and the trailer, which had caught fire.

She was found deceased inside her burnt-out car by emergency crews. Elena Kulikova’s sister said that her dog was also inside the vehicle at the time and passed away.

A celebration of life was held on Sunday at 154 Shuter Street—the first place where Elena Kulikova displayed her artwork. The room was full of flowers and paintings, and a group fo performers, led by Elena Kulikova’s boyfriend on vocals, performed a heartfelt rendition of “Purple Rain.” 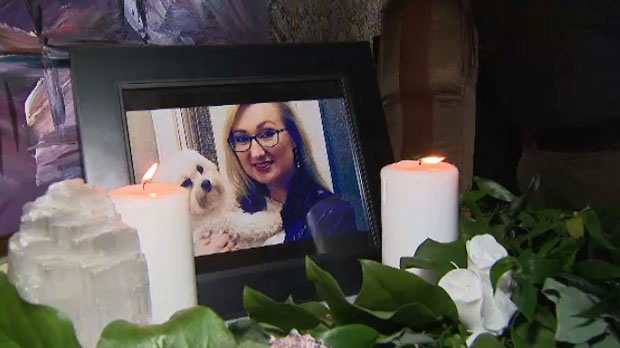 A photograph of Elena Kulikova is displayed at her celebration of life at 154 Shuter Street. (CTV News Toronto)

Much of the art on display was that of Elena Kulikova’s and had been painted over the last year. She recently began to explore abstract art while overcoming a difficult and painful divorce and her sister said the process helped her heal. Her sister said that she often used art as a form of healing.

“I think she was her very best this past year. Me and my parents were saying that maybe she was preparing her soul to be taken,” Kristina Kulikova said.

At the same time, Kristina Kulikova said that her sister was “ambitious” and “feisty.”

“She continuously wanted to leave this world a better place and be herself a better human,” she said. “Elena would have loved this. She wanted everyone to sing … She wouldn’t want everyone somber and sad, that wasn’t who she was.” 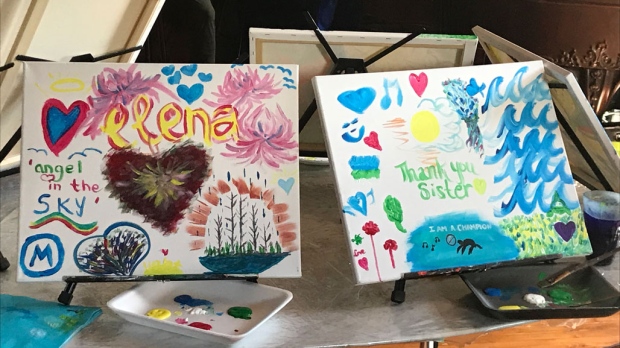 Artwork is displayed at a celebration of life for Elena Kulikova, who died in a collision on the QEW last week. (Nick Dixon/CTV News Toronto)

Elena Kulikova was an artist and a philanthropist. She was an ambassador with Plastic Oceans Canada and donated a portion of the money she made from selling her paintings to the foundation.

Her sister said that she would get frustrated if anyone brought plastic inside her home and was devastated by the fires in the Amazon.

“She was devastated by all the animals that were dying,” she said. “On Friday morning, probably about the same time we found out, the rain started to rain in the Amazon rainforest, in places where it shouldn’t have rained.”

" I believe that she left us to go help the planet.”

The news of the rain came from Elena Kulikova’s boyfriend, who said that someone once told him the universe will take people at their peak.

“When I saw the rain in the Amazon in a season when it’s not supposed to rain, it made me feel amazing,” he said. “Selfishly I miss her... but more selflessly I’m so proud of what she’s going to do.”

The celebration of life was also meant to help reset people’s memories after shocking images of the QEW collision began circulating. Video footage from the scene showed the tractor trailer completely in flames. Thick black smoke could be seen emanating from the highway. 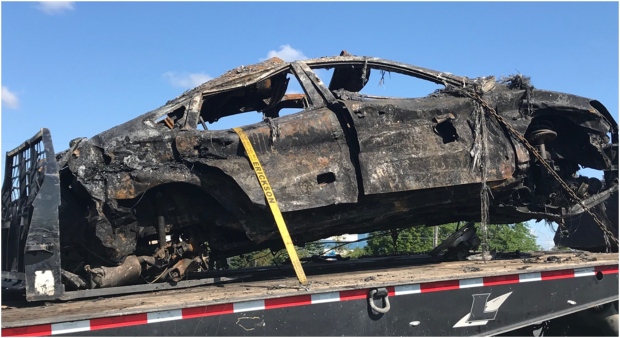 A women is dead after a multi-vehicle crash on the QEW near Trafalgar Road. (Sean Leathong / CTV News Toronto)

In one image taken after the crash, a burnt-out car is seen being loaded onto a truck by crews trying to clear the scene.

Elena Kulikova’s best friend said that she doesn’t want those images to be her last memory of her friend.

“We don’t want to just recall the last minute of her life, how unfair and unjust would that be to her life,” Evelyn Bailey said. “I just remember we used to laugh a lot. I think as friends when you connect in that way, it’s the same feeling I feel now, which is why its allowing me to really feel her heart and be ok with the incidents that have unfolded.”

The Kulikova family is still making final arrangements for the funeral and have set up a GoFundMe page to keep her memory alive. A portion of the proceeds collected will be used to support Plastic Oceans Canada.