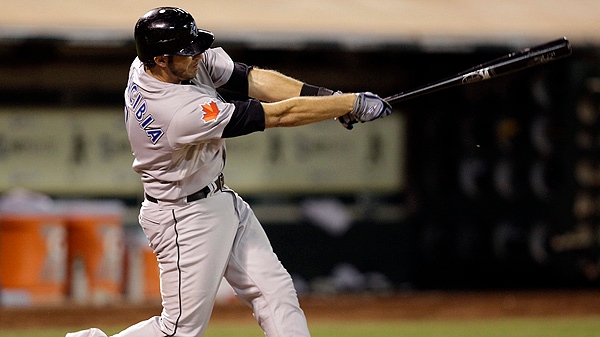 OAKLAND, Calif. - Ricky Romero pitched as calmly with runners in scoring position as he did with the bases empty.

Not even pitching in front of his father and siblings was enough to rattle the Toronto left-hander, who is in the middle of the finest stretch of his career.

Romero pitched a three-hitter to extend his career-high winning streak to five games and the Blue Jays, getting a big night from Colby Rasmus, beat the Oakland Athletics 7-0 on Tuesday night.

"He pitched like he's been on the run for the last five or six outings," Toronto manager John Farrell said. "He was down in the strike zone, he was efficient. When he gets in that rhythm he doesn't try to do anything more than what the situation's calling for."

Romero (12-9) struck out six and walked two while recording his second shutout this season and third of his career. He had to pitch out of a series of jams early then retired the final 13 batters he faced.

He laboured at times but worked out of trouble to remain unbeaten in five starts against Oakland.

"Everything feels good right now," Romero said. "I'm attacking the zone, being consistent with my pitches and not panicking in situations like I had in those first few innings. I feel in control right now."

Romero pitched out of a two-on, no-out jam in the second then wriggled out of trouble again after Oakland loaded the bases in the third by getting hot-hitting Brandon Allen to foul out to first. Allen, called up from the minors on Saturday, was in a 9-for-16 stretch before popping out.

Romero, who shut out the St. Louis Cardinals on four hits June 6, settled down after that and allowed only one hit the rest of the way. He improved to 4-0 in five career starts against the A's.

"What he's done is slow the game down mentally," Farrell said. "He's not rushed into any pitches ... and in key spots he's made some big pitches."

"We've had inconsistencies across the board at times so when a guy like him has some struggles, everybody feels it," Oakland manager Bob Melvin said. "He's not the only one and it's not like he's all the sudden lost his stuff. He's just having a difficult time being consistent."

Rasmus, acquired from St. Louis as part of an eight-player trade on July 27, doubled and scored in the second then hit a towering two-run drive off Cahill in the fourth. The home run, Rasmus' third with Toronto and 14th overall, caromed off a sign hanging from the second deck in right field and gave Toronto a 4-0 lead.

He also singled leading off the sixth for his first three-hit game since the trade.

Encarnacion, meanwhile, remained one of the hottest hitters in the American League. The Blue Jays designated hitter singled in Bautista in the fourth and scored on Rasmus' home run. He has reached safely in 17 consecutive games.

Adam Lind added an RBI single off Cahill in the fifth and J.P. Arencibia drove in two runs in the sixth to chase the Oakland right-hander, who is in the worst slum of his career.

NOTES: Toronto has homered in 12 straight games. ... Melvin made his pitchers take fielding practice before the game. Oakland went into the night tied with Texas for most errors in the AL. ... The A's placed RHP Trystan Magnuson on the 15-day disabled list with tendinitis in his pitching shoulder and called up LHP Jordan Norberto from Triple-A Sacramento. ... Toronto optioned struggling starting pitcher Brad Mills to Triple-A Las Vegas two days after the left-hander's second consecutive rough outing. Since beating Baltimore on Aug. 5, he has allowed 12 earned runs in six innings. ... LHP Luis Perez, who earned the win in relief of Mills on Sunday,is scheduled take Mills' spot in the rotation and start Saturday at Oakland. .. The Blue Jays plan to call up right-hander Joel Carreno from double-A New Hampshire. ... LHP Brett Cecil (4-5) goes for his first win since July 29 when he pitches for the Blue Jays on Friday. Cecil took the loss against Oakland on Aug. 9 when he allowed three runs in seven innings. ... Canadian RHP Rich Harden (3-2), who beat the Blue Jays on Aug. 9, pitches for the A's.