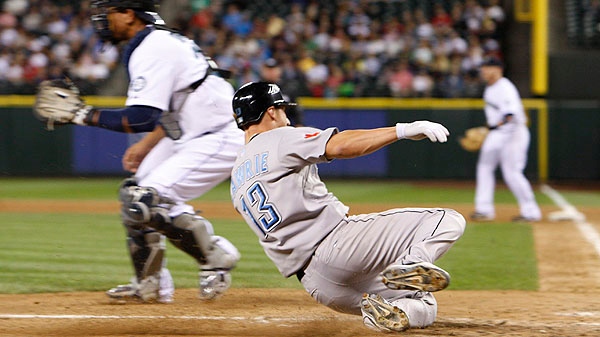 SEATTLE - It didn't matter to the Toronto Blue Jays that they blew an early six-run lead to the Seattle Mariners Tuesday night.

They just regrouped and went on to a six-run victory.

Jose Bautista hit his major league-leading 35th home run, Colby Rasmus and Aaron Hill each drove in four runs and the Jays rallied twice in a 13-7 win over the Mariners.

The Blue Jays appeared on the way to an easy victory with a six-run first inning, highlighted by Rasmus' three-run double. But by the third inning, the Mariners had tied it.

"Every at-bat everyone's trying to go up there and do something to help the team," Rasmus said. "I don't think when you give up a lead that we're going to give up the game and just cash it in. Everybody kept battling and we started punching across some runs again. I don't think that matters to this team."

The Jays broke away again with a four-run fifth.

Wilhelmsen's next pitch caromed off umpire's Tim McClelland shin and into the Mariners dugout. Bautista came home on the wild pitch.

Rasmus and Aaron Hill each added a sac-fly and J.P. Arencibia had a RBI single to build the lead to 10-6.

It's the most RBI for Rasmus since coming over in a July 27 trade with St. Louis.

Hill, who had a two-run home run in the first, matched his career high for RBIs.

"It's good to see the life in his (Hill's) bat that we've known him for," Jays manager John Farrell said. "For (Rasmus) and Hilly, just to come up in a key spot, get a big hit, maybe they can take a deep breath and know that they have the abilities to go out and play the game."

Bautista's two-run home run in the sixth was estimated at 438 feet.

Farrell said by his players being undeterred by the Mariners initial comeback "speaks volumes for our offence."

Trayvon Robinson had two hits, including a two-run single for the Mariners.

Mike Carp extended his hitting streak to 16 games with a single in the third. He's hitting .385 with four home runs and 18 RBI during the streak. He entered the game with the most August RBI in the majors with 17.

Nine Jays batters went to the plate in the six-run first, and Vargas (7-11) came within a strike of getting out of the inning unscathed. With the bases loaded and two outs, he had a 2-2 count on Rasmus. Rasmus then drilled a cut fastball into the right-centre gap to clear the bases.

Langley, B.C., native Brett Lawrie, who had three hits, drove in Rasmus with a single to centre. Hill followed with his sixth home run.

The Mariners cut the lead in half in the second. After a leadoff walk to Carp, Wells hit his blast into the left-field bullpen, his ninth.

Miguel Olivo followed with a home run over the left-centre wall, the fourth time this season the Mariners have had back-to-back home runs and second time in two nights.

Eight batters went to the plate in the third as the Mariners scored three more. Robinson had his two-run single and Kyle Seager tied it with a RBI hit.

Shortstop Yunel Escobar saved two runs with a diving stop of a Jack Wilson grounder. He got up and threw him out, stranding runners at second and third.

But in a game with 20 runs and 26 hits, it was a guy who quieted the bats who stood out. Luis Perez (2-2), taking over for Brad Mills in the fourth, earned the victory. He matched his career high with four innings, allowing three hits, one run, two walks and striking out three.

"The four innings by Luis Perez are probably the story in tonight's game," Farrell said. "It looked like it was going to be one of those nights when we couldn't score enough. The ball was carrying here uncharacteristically. It was a good overall effort from Luis."

Perez added, "I was just trying to get outs and prolong my stay as long as I can. I was in the game early. I wanted to get the quickest outs."

Notes: RHP Jon Rauch gave the Jays medical staff little warning before Monday's game that he would eventually have to have an appendectomy Tuesday morning. "Before the game he felt some stomach discomfort. But he checked out OK and certainly felt he was capable of pitching," Jays manager John Farrell said. "Then after the game things began to intensify a little bit and at that point we felt like it was time to get him checked." Rauch was placed on the 15-day DL. LHP Trever Miller also was designated for assignment and two lefties, Wil Ledezma and Rommie Lewis, were called up from Triple-A Las Vegas. ... An MRI has revealed that OF Rajai Davis has a hamstring tear. Farrell said for Davis' mindset "our goal is to get him back on field before season's out." ... With the last-minute signing Monday of first-round pick, LHP Danny Hultzen, the Mariners also agreed to give him a big-league contract. Room needed to be cleared on the 40-man roster so RHP Chris Ray, on the DL with a right shoulder strain, was released. ... RHP Brandon Morrow (8-7, 4.55), traded to the Blue Jays two years ago, finally makes his first start against his former team at Safeco Field Wednesday. "I think any time a player comes back to his original organization, there's going to be some added adrenalin, maybe some emotion," Farrell said. ... The Mariners will send out RHP Blake Beavan (3-3, 3.39), acquired in the Cliff Lee trade with Texas last season. He has never faced Toronto.