TORONTO -- The owners of a popular Syrian restaurant in Toronto say they will be permanently closing shop after their family and staff received “numerous hate messages” and death threats over the past week.

Soufi’s, a well-known Queen West restaurant operated by a Syrian family who recently immigrated to Canada, came under fire last week after the son of the restaurant’s owners was involved in an incident outside of a fundraiser in Hamilton for Maxime Bernier’s People's Party of Canada (PPC).

A line of protesters blocked her from entering the building and some demonstrators reportedly called the elderly woman “Nazi scum.”

After learning of the incident, Bernier sent out multiple tweets in support of the woman.

“Thank you so much Madam for standing up for free speech,” the politician tweeted. “We need courageous people like you if we are to keep our country STRONG and FREE.”

Thank you so much Madam for standing up for free speech!

We need courageous people like you if we are to keep our country STRONG and FREE. https://t.co/Z672PFnAFc

In an apology published on Facebook days later, the restaurant confirmed that the owners’ son Alaa was one of the protesters at the event.

“We would like to formally apologize for the incident that occurred with the elderly woman. Alaa regrets that he did not step aside and/ or stand up against the act of verbal abuse that occurred against her, and would love the opportunity to personally extend his apologies to her,” the family said, adding that their son did not in any way verbally or physically assault the elderly woman.

“Our family and business do not condone acts of hate, violence or harassment in any shape or form, and advocate for peace, equality and free speech for all human beings. Our family immigrated to Canada with the intention of living and working peacefully.”

Husam and Shahnaz Alsoufi and two of their children moved to Canada in October 2015 to join their daughter Jala, who moved to Toronto three years earlier to attend the University of Toronto.

The family said they were inspired to open the restaurant to share their love of Syrian culture, music, and “delicious homemade food.” 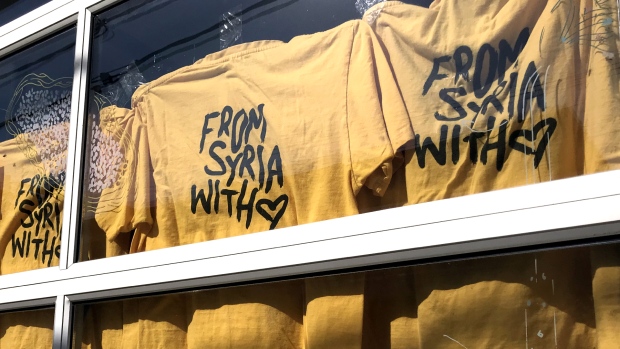 The Syrian spot was featured in Toronto Life, Now Magazine, and was even profiled in an article by the New York Times, which referred to the restaurant’s food as Toronto’s “new craving.”

But after more than two years in business, the restaurant confirmed Tuesday that it could no longer continue to operate. 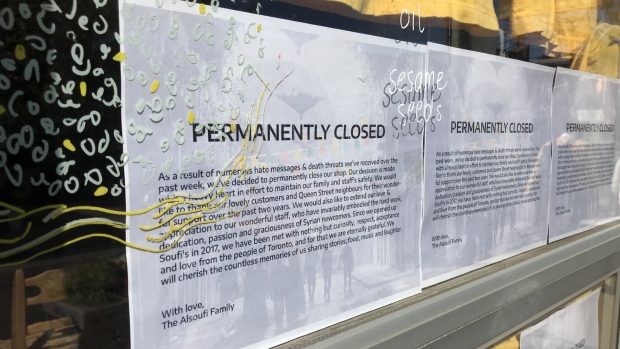 “As a result of numerous hate messages & death threats we’ve received over the past week, we’ve decided to permanently close our shop. Our decision is made with a heavy heart in (an) effort to maintain our family and staff’s safety,” a statement posted on Soufi’s Instagram account read.

Tuesday evening the Alsoufi family released another statement saying their decision to close the restaurant was made after their son was “doxed and physically assaulted” on Friday.

Attached to the statement were some examples of obscene and violent messages that were posted on various social media platforms.

“We are heartbroken about having to make this decision; however, we could not put our family members, staff, and patrons in danger. The magnitude of hate we are facing is overwhelming,” the statement reads.

Please know that we do not wish to hide or conceal the events that led to these threats, and wish to address the claims and information shared by certain media groups in the near future, once it’s safe for us to do so

Patrons of the shop reacted to the news with disappointment and expressed support for the family.

“I am so sad and infuriated about this,” one Instagram user said in response to the statement. “I’m angry the police hasn’t offered more: they should be helping to protect your business.”

Another patron wrote, “I hope (it’s) solved soon and we can all enjoy your amazing manakeesh again. So sorry you have to go through this.”

In their statement announcing the closure, the restaurant owners thanked their customers and neighbours for the support over the past two years.

“We would also like to extend our love & appreciation to our wonderful staff, who have invariably embodied the hard work, dedication, passion and graciousness of Syrian newcomers."