TORONTO -- Family and friends gathered in Stoney Creek to mourn a 14-year-old boy who was fatally stabbed outside his school in front of his mother last week, describing the teen as being protective of his friends and a passionate classic car enthusiast.

Ahead of Devan Bracci-Selvey’s funeral, the community rallied together and lined the street with dozens of antique cars and motorcycles as part of an homage to the teen’s love of the vehicles. Large pink ribbons were placed on the vehicles to symbolize anti-bullying.

“Devan was an avid mechanic apparently and he liked older cars. If you look up this street here you will see there are no less than four, five dozen older cars and there are a bunch of folks from different motorcycle clubs who also attended and it’s a big show of support by the community,” area resident Andrew Hines said. “We need to end bullying, as soon as possible, yesterday.”

A 14-year-old boy who said he was one of Devan Bracci-Selvey’s best friends thanked the drivers who showed up at the funeral.

“I’m thanking every driver who is here. Every car, every bike. No matter what kind of car it is, they showed up to support,” Michael Mcengee said through tears ahead of the visitation. “(Devan) only had a small circle of trust and if you were in that circle, he would defend you like a family member.”

“I just wish I got to spend more time with him.” 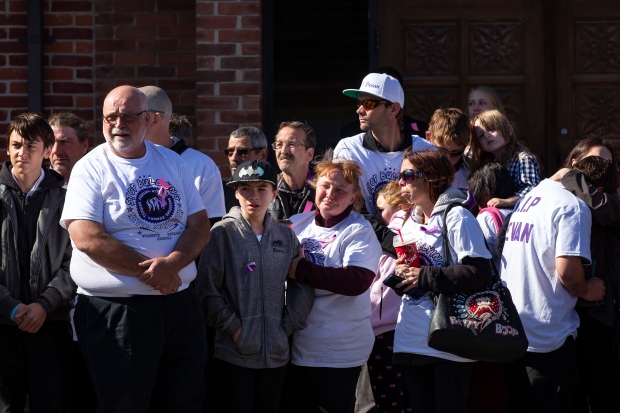 On Monday, emergency crews were called to Sir Winston Churchill Secondary School, located near Parkdale Avenue South and Main Street East, for reports of a violent incident. When they arrived, they found Devan Bracci Selvey in critical condition, suffering from multiple stab wounds.

The teenager was transported to the hospital, but succumbed to his injuries a short while later.

The teen’s mother was already at his side when officers arrived at the school. Shari-Ann Sullivan Selvey said that her son had called her to the school because a group of teenagers were bothering him. She said that he had been the victim of bullying ever since he started school in September.

“I ran over there and then my day and my life fell apart,” she said. 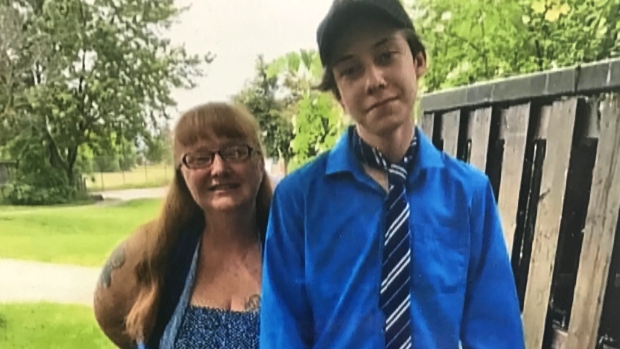 Devan Selvey and his mother Shari-Ann Sullivan Selvey are seen in this undated image. (Supplied)

When her son was stabbed, Shari-Ann Sullivan Selvey was in front of the school and witnessed the event. She told reporters on Wednesday that she can’t close her eyes because every time she does, she relives it.

Last week, Sgt. Steve Bereziuk said that investigators believe there was “some element of pre-planning and pre-meditation to this homicide.” He also alleged it was the 14-year-old suspect that wielded the knife.

The identity of the people charged in connection with Devan Bracci-Selvey’s death cannot be released due to a publication ban and the Youth Criminal Justice Act.

Police confirmed that they are looking into bullying as a factor in the investigation.

“That part of the investigation is growing,” Bereziuk told reporters. “We will continue to probe the bullying concerns.”

Meanwhile, the director of the Hamilton-Wentworth District School Board confirmed that incidents of bullying were reported to the school administration.

“He missed a lot of class, he would go for some classes and then call me and I’d go pick him up or sometimes he just wouldn’t go, he just refused to go in the morning,” Shari-Ann Sullivan Selvey said.

On Thursday, an anti-bullying football game was held in honour of Devan Bracci-Selvey. Participants were asked to wear purple, which was the teen’s favourite colour, and to donate money towards the funeral.

“It’s been such a tragedy for the school for every student, every teacher, administrators as well, and parent. I can’t imagine the hurt, the travesty, the parents and the friends of the young boy are going through,” football coach Kevin Harrison said that day. 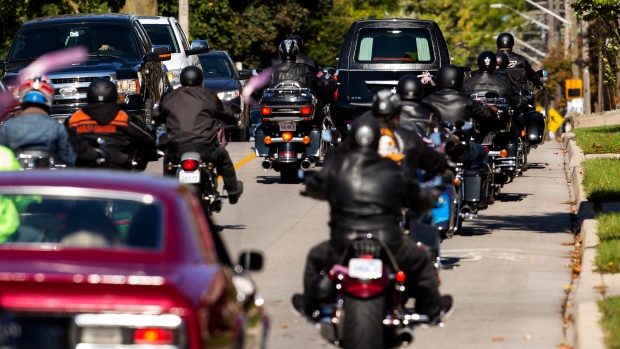 Shari-Ann Sullivan Selvey said that her son had a “beautiful soul” who was very protective of his friends.

“He protected everybody. He stood up to everything that was wrong. He was just a very passionate kid,” she said. “My son was a toothpick and he stood up for people – no one could go near his friends with anything. They couldn’t call his friends names or nothing.”

About 300 people attended the visitation on Saturday, with dozens wearing shirts that said “R.I.P Devan” and “Stop Bullying” in a campaign to end bullying.

After the visitation, the sound of engines could be heard throughout the street. All of the motorcycles and vehicles that had lined the streets followed the hearse as it left the area carrying Devan Bracci-Selvey to his final resting place.

“He was priceless,” a friend said as the motorcade left the area. “He was someone you wouldn’t want to lose.”