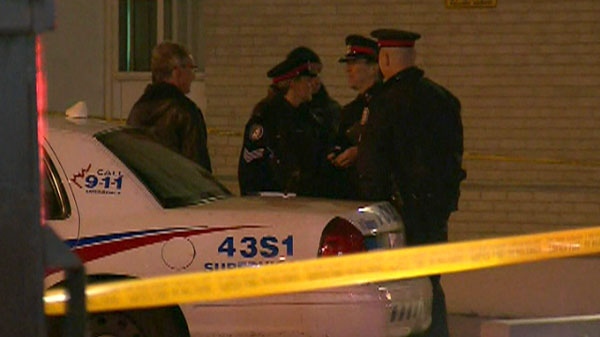 Police are shown at the scene where a 45-year-old man was shot and killed at an apartment complex at 65 Greenbrae Circuit on Wednesday, Nov. 24, 2010.

A man has died from multiple gunshot wounds in a Scarborough apartment building.

The incident took place about 6:45 p.m. Wednesday at 65 Greenbrae Circuit, which is just north of Lawrence Avenue East and Markham Road.

Witnesses report hearing up to one dozen shots. Up to three people were reported fleeing from the scene in a silver Dodge Charger.

The victim is male and is believed to be about 25 years of age. Paramedics rushed him to Sunnybrook hospital's trauma unit, but he was later pronounced dead.

The incident is believed to be the 10th shooting in Toronto in the past six days. Police in 43 Division are investigating.

The area was the scene of another shooting homicide in September.

Jameel Spence, 27, was shot at a family barbecue taking place at 30 Greenbrae Circuit.

On Saturday, police canvassed the area, hoping to find new evidence that would lead them to Spence's killer.