TORONTO -- A Mississauga, Ont. man said he was surprised to learn the additional fees he paid to renew Nexus cards for himself and his wife could have been avoided if he had not used a third-party representative.

Murray Walker first purchased the cards five years ago and used one of the first companies he found when searching on Google. He said that after he had renewed the card, his friends, who are also Nexus car holders, told him he was paying unnecessary fees.

“There were two payments. One was through PayPal for $129 U.S. each and another government fee of $50 U.S. for each card. By the time you convert it to Canadian funds it was like about $400," said Walker.

The Trusted Traveler Program between Canada and the United States is extremely popular and many Canadians have a Nexus card to help them speed up crossing the border.

“It lets you bypass a lot of people when crossing the border. A lot of the time you get there and there are hundreds of cars waiting to cross and there is another lane, the Nexus lane, with just a few cars in it so it saves a lot of time."

On the Canada Border Services Agency website there is a warning to watch out for third party representatives when applying for or renewing a Nexus card. Due to the popularity of the program, some companies pay Google to be the first companies to “pop up” in the search engine. Applying for a Nexus card has a fee of $50 USD, but some websites that claim to help speed up the process are charging as much as $200 more.

According to the Canada Border Services Agency, “using a third party will not speed up the process…and may delay...or may result in a denial of membership.” As for the true cost to get a Nexus card, the agency says “there is a non-refundable fee of $50 U.S per applicant for a five year membership card.” 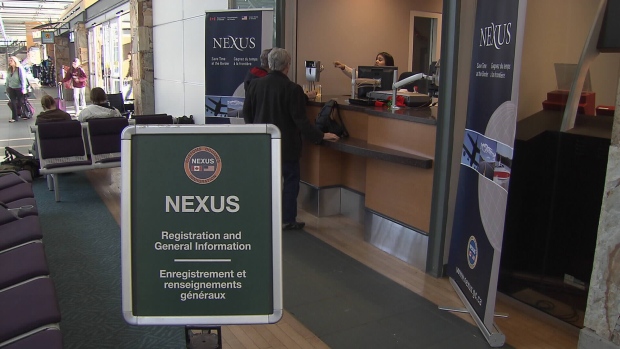 "I just didn't know you could do this kind of thing directly,” Walker said. “I would tell anyone if you get something from a third party think twice and just do it yourself."

The first time you apply for a Nexus card, you'll have to be interviewed to make sure you're eligible for the program. To avoid confusion and added fees, you should deal directly with the Canada Border Services Agency.