Man dies in hospital after shooting outside espresso bar

A man has died of his injuries in hospital after being shot outside an espresso bar plaza in the city's north Monday evening.

Shortly after 6 p.m., Toronto police responded to a shooting outside Tony's Espresso Bar, near Dufferin Street and Glencairn Avenue.

"The vehicle was here behind me in the parking lot. There was a shooter that came out of that vehicle and proceeded to shoot at our victim. The shooter then got back in that car," Singh said.

The victim was rushed to a hospital trauma centre via emergency run, but later succumbed to his injuries. 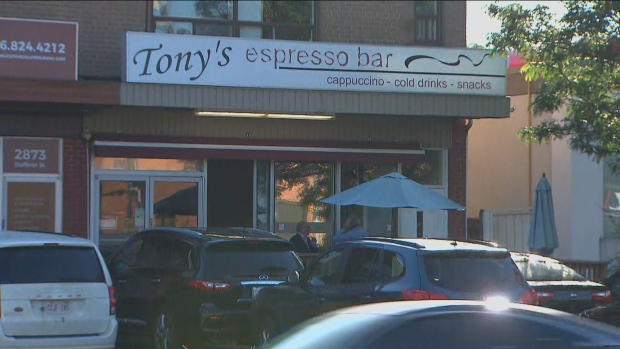 Yellow police tape cordoned off the plaza as officers scoured the scene for evidence Monday night. Cameras captured officers bagging a firearm at the scene, but police did not confirm whether that is believed to be the weapon used in the homicide.

A vehicle with bullet holes in it was found at the scene. It's not yet clear if the victim was inside the vehicle when he was shot.

"There is surveillance footage in the area and we are in the process of downloading it," Singh said.

He added that police are asking any business owners in the plaza who have not yet spoken with police to come forward so that they can obtain as much video evidence as possible. 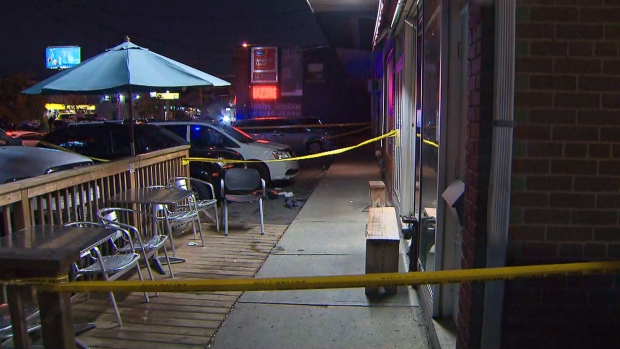 "Right now there is a shooter out there, so if there's anybody that has any information about that person or the vehicle that was here, please give us a call," Singh said.

Singh said the suspect is described as a male who was dressed in black and was possibly wearing a mask.

The suspect was last spotted boarding a white SUV or van that went northbound on Dufferin Street, Singh said.

Coun. Mike Colle, who represents the area, came to the scene of the shooting Monday night and said more needs to be done to curb the spate of gun violence that has plagued the city.

"We're fed up and disgusted that these shootings keep happening," Colle said.

"The police are working around the clock. We've had extra policing in this area since May of this year. The police are out in full force, but the police cannot stop these gun murders by themselves.

"What we need to do is stop these guns from coming across our border. Our border is a sieve."

He also said more needs to be done "to fix the broken bail system" and toughen laws for gun possession and called on federal and provincial politicians to do so.

"No matter how hard the police work, no matter how hard we work to make this community safe, these guns keep coming in and there's basically no control of the guns," Colle said. "We need to do something dramatic and stop making excuses for gun crimes."

Colle said the victim is a retiree in his 70s, but Singh said he is not identifying the victim yet as he is still working to notify next-of-kin.