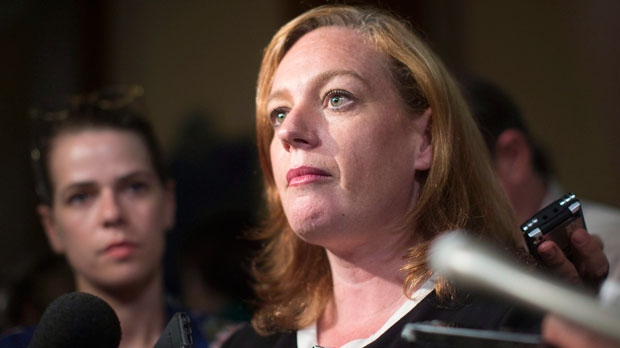 Lisa Macleod, Ontario's Children, Community and Social Services Minister, talks with the media after Question Period at the Ontario Legislature in Toronto on Thursday, August 2, 2018.THE CANADIAN PRESS/Chris Young

Social Services Minister Lisa MacLeod is denying accusations that her ministry artificially inflated the waitlist for autism treatment in Ontario, calling the allegations a “conspiracy theory.”

MacLeod’s comments come in the wake of newly surfaced government documents showing the ministry froze the funding for autism treatment in early October, keeping families on the waitlist until March 31.

Families claim pausing the Ontario Autism Program in the fall allowed Premier Doug Ford’s government to inflate the number of people on the waitlist to 23,000, justifying the new equalized funding model.

MacLeod has repeatedly stressed that figure as the driving force behind the Progressive Conservative plan, expressing a desire to eliminate the waitlist within 18 months.

In a statement on Sunday, MacLeod’s office denied the allegation that the list was inflated.

“It is disturbing and disgraceful that there are suggestions of artificially inflating the waitlist. Anyone playing politics with these families and continuing to push this false narrative should be ashamed,” the statement sent to CTV News Toronto said.

MacLeod said the Ontario Autism Program was “bankrupt” when she was first appointed as minister, forcing the treasury to spend an additional $100 million to keep the program afloat.

Officials in MacLeod’s office said as a result, they asked service providers to “honour existing commitments” but to stick to their budgets - meaning there was no money for additional children.

The directive was sent to provincially funded autism service providers such as Kerry’s Place in Aurora, which in turn told therapists to “pause” taking on new clients.

“We have been assured that this is very short term (sic) and as soon as we get more information from the ministry about how to proceed we will share it,” read one email dated Sept. 27, 2018.

In an email sent to staff, Kerry’s Place indicated that the general public and other autism-related agencies “are not aware of the ‘hold.’”

The move meant that, unbeknownst to parents, children with autism were stuck on the waiting list for five months.

The ministry also advised service providers not to inform families of the changes and to direct parents inquiring about the waitlist to “workshops, groups and seminars about ASD.”

Liberal MPP Michael Coteau called the allegations “shocking and shameful,” saying by keeping parents in the dark the government was deliberately giving them false hope.

“It is now clear that the minister has lost the confidence of the public, but more specifically, families with children with autism. It is time for her to do the right thing and step down,” Couteau said in a statement.