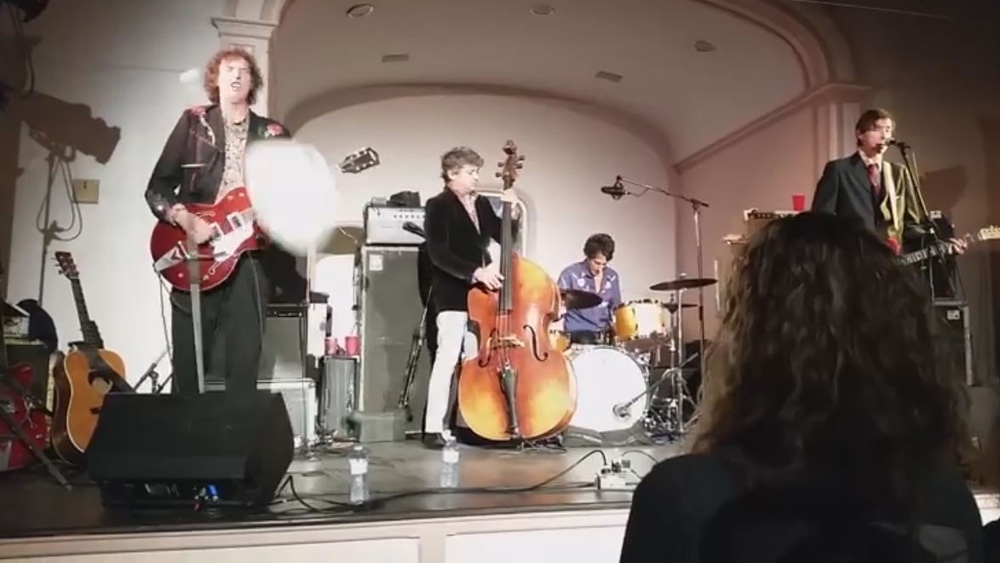 Travis Good of The Sadies reacts after a light cover fell and hit his microphone stand while the band was performing in Maitland, N.S. on Sept. 30, 2018. (Kyle McDonald/Facebook)

MAITLAND, N.S. -- The lead singer for one of Toronto's best-known rock bands was nearly hit by a falling light cover during a Nova Scotia gig.

Travis Good of The Sadies was singing at a show in Maitland, N.S., Sunday when a light cover fell, hit his microphone stand and shattered on the ground.

The near-miss was caught on a video taken by Shant Pelley and posted by Kyle McDonald, with the band abruptly stopping the performance in disbelief amid shouts from audience members.

The band's Facebook page shared the video on Wednesday, writing "Insane footage from The Sadies' show on Sunday night in Nova Scotia ... Travis is okay!"

The country rock band was performing at the High Tides Arts and Community Centre, an old church converted into a events facility.

McDonald, a sound engineer and friend of the band, said the light cover fell near the end of the set, and there was a "strange vibe" in the room afterwards, as people looked around for other possible hazards.

McDonald has worked many shows over the years, but said the startling incident was a first, and he and the group reflected afterwards about how the incident could have ended much worse.

"I've been working with those guys with sound-related stuff since 2001, so you just get thinking about telling them you love them after the fact," said McDonald.

"Anything can happen so quick."

Nobody was seriously hurt, but McDonald said the incident emphasized the importance of checking a venue for safety as an audience member and performer.

"From now on, even in terms of just a showgoer, you're just more aware of what's above you," McDonald said.