TORONTO – Investigators believe an innocent 23-year-old man was shot and killed while heading home from work along a Mississauga highway one year ago just because he was in the same type of vehicle as the intended target.

“He had his life on the right path, but simply heading home and being in the same car as someone else, that’s what ended up costing him his life,” Insp. Marty Ottaway told reporters at a news conference held at Peel Regional Police headquarters on Tuesday morning.

“It’s beyond words to describe. Everyone should be outraged, it’s senseless.”

On Nov. 13, 2018 at around 1 a.m., emergency crews were called to Highway 410 near Courtneypark Drive for a reported single-vehicle crash.

Upon arrival at the scene, officers located Brampton resident Jason Ramkishun inside a 2014 Honda Accord in a ditch. Police said he had been shot. 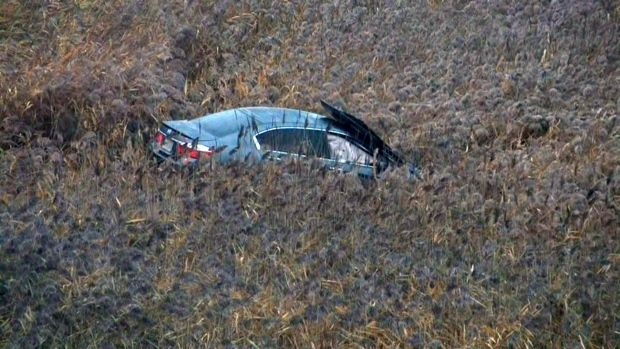 “We determined that Jason was coming home from work that night from a business location in Mississauga where he worked as a security guard,” Ottaway said at the news conference with Ramkishun’s family standing beside him.

“He was travelling north on Highway 410 by Courtneypark Drive when another vehicle pulled alongside his car and unknown suspects opened fire.”

Ramkishun was rushed from the scene to a trauma centre in critical condition but succumbed to his injuries a short time later. 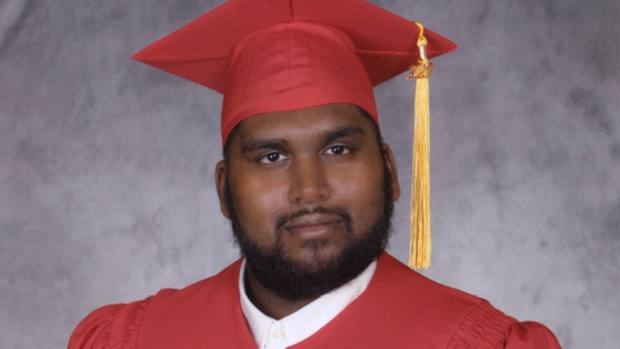 While updating the fatal shooting of Ramkishun, Ottaway added that a second shooting took place on the same highway one week later.

“On Tuesday, Nov. 20, 2018, shortly after 11 p.m. a male victim was driving his 2013 Honda Accord northbound on the 410, just north of Derry Road when a vehicle pulled alongside him and unknown suspects started shooting,” he said.

“The victim’s vehicle was struck numerous times and was hit by gunfire.”

Ottaway said the man was able to drive himself to Brampton Civic Hospital and then was later transported to Sunnybrook Hospital to be treated for gunshot wounds.

“He has since recovered from his injuries.” 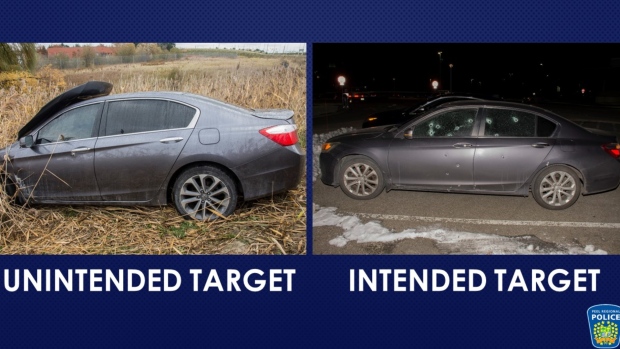 “The firearm used in the homicide of Jason Ramkishun is only one of the two firearms used in the second 410 shooting on Nov. 20, 2018.”

The firearm was recovered by officers in August 2019 during an “unrelated investigation.”

“Through our investigation, it is our belief that the victim shot in the second shooting on Nov. 20, 2018 was the intended target on both 410 shootings,” Ottaway said. “We know that these two shootings are linked, we know that forensically, through evidence we found at the scene.”

Ottaway said investigators have interviewed the man shot in the second incident, but could not provide any further details as to their discussion with him.

“We have spoken to him, but I won’t be able to get into what was talked about with our investigators as far as the statement goes,” he said. “He did speak with us, I just can’t get into any further details than that.”

‘A family man, a good man and a good friend’

At the news conference, Ottaway read a statement on behalf of Ramkishun’s family as the 23-year-old’s mother, father and sister stood beside him.

“On the morning of Nov. 13, 2018, our family woke to find that Jason had not returned home from his evening shift as a security guard,” the statement read. “Morning news reports would soon detail a police investigation that had shut down Highway 410.”

“There was a single vehicle off the roadway that resembled Jason’s car.” 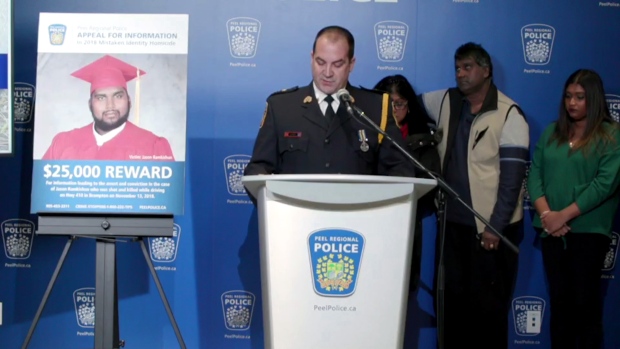 The family said their concern for Ramkishun’s whereabouts grew immensely.

“Police officers knocked on our door and informed us that Jason was the victim of a shooting that happened on Highway 410. Jason was dead.”

The family described the 23-year-old as a “family man, a good man and a good friend.”

“He wanted to give back to his community and became a security guard to further his own interest in law enforcement. He loved his car and he took very good care of it. It meant a lot to him and the pain is even greater to us that when Jason was taken from us, the car he loved so much was also destroyed.”

After the news conference, Ramkishun’s parents spoke outside of their Brampton home, saying they will be “very thankful” to anyone who comes forward with any information regarding their son’s death. 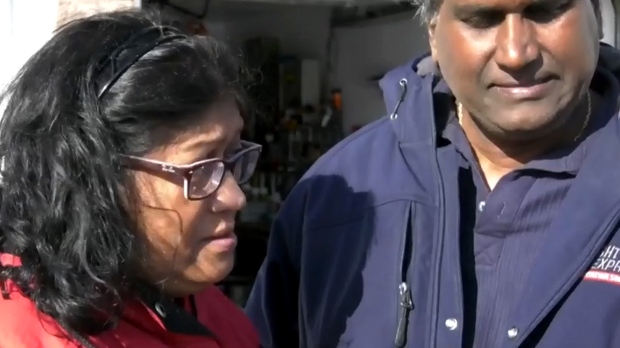 “It’s really heartbreaking for us because our son was so innocent, didn’t do anything, just went back to work for the first day after his grandmother passed away and never returned,” his mother, Mala Ramkishun, said.

“We beg, we beg and ask if anybody knows anything to go forward, just to bring a closure for Jason, so Jason can have justice.”

Mala Ramkishun’s husband, who is a truck driver, said he often has to go on Highway 410 for work, but she always tries to avoid the roadway.

Mala Ramkishun said she doesn’t drive and urges her husband to avoid the highway when she's in the car with him.

As investigators appeal for anyone with any further information to come forward, they announced a $25,000 reward in the case on Tuesday.

“The reward is for information that leads to the arrest and conviction of those responsible,” Ottaway told reporters.

“The loss of Jason Ramkishun was tragic and heartfelt – not only to the family here today, but also to other family members, friends and the community. I offer my deepest condolences once again to them all and everyone else affected by this senseless act.”

At the news conference, Peel Regional Police Chief Nishan Duraiappah said they are hoping the incentive of the reward will lead to those with “critical information” to come forward.

“It’s one thing to have an idea of who might have been responsible for something, it’s another thing for us to ensure that we get it through the court system in a water-tight way that is prosecutable because ultimately that is the only way to bring full justice to a victim and the victim’s family,” he said.

“Investigative team proposes it as an option then it’s my job to go to the police services board, which they were of course in this tragic circumstance absolutely willing to support us moving forward.”

Ottaway said investigators have been and continue to comb through evidence obtained from the area and witnesses, including surveillance camera footage.

While reviewing this evidence, investigators said they have yet to determine how many suspects they are searching for. Also, officers were not able to provide any description of any possible suspect vehicle.

“I’m confident that there are people in the community that know what happened that night, they know people involved in the shooting and it’s those people that we’re appealing to do the right thing and contact us,” he said.

“I think everyone can see how much the family is hurting here. You can see how difficult of a time they are still having a year after Jason’s death.”

Anyone with further information is asked to contact investigators at 905-453-2121, ext. 3205 or Crime Stoppers anonymously.