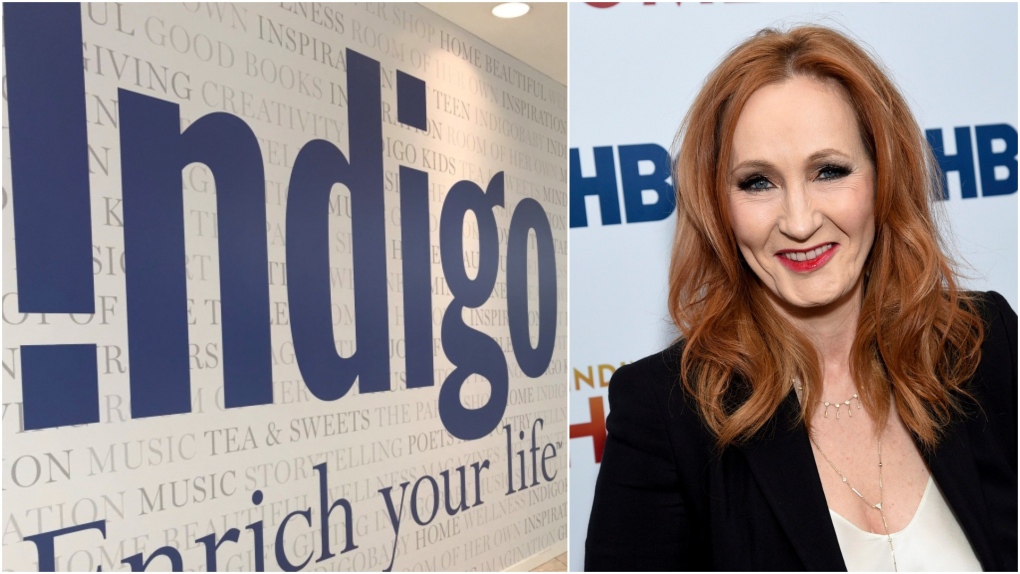 TORONTO -- Indigo Books & Music Inc. has released a statement following a number of tweets by J.K. Rowling, which many consider to be transphobic.

“Indigo stands firmly and positively with the Transgender community,” the statement posted to Instagram on Thursday reads.

“It is disappointing to us that J.K. Rowling, an author we admired and supported and that our customers have so supported, would make statements so inconsistent with our values.”

“The identities of all Transgender people must be respected without question or judgement.”

Indigo stands firmly and positively with the Transgender community.

Indigo’s statement comes after the “Harry Potter” author discussed an article on Twitter earlier this month, taking issue with the use of the words “people who menstruate.”

“I’m sure there used to be a word for those people. Someone help me out. Wumben? Wimpund? Woomud?” Rowling wrote.

Tens of thousands of people have since criticized the tweet and attempted to educate Rowling on the issue, noting that transgender men and other non-binary individuals menstruate as well.

‘People who menstruate.’ I’m sure there used to be a word for those people. Someone help me out. Wumben? Wimpund? Woomud?

Some of those responses include people who identify as transgender, fans of the author, and even the star of the “Harry Potter” film franchise Daniel Radcliffe.

Rowling doubled down on her comments in another tweet which ended in her saying “it isn’t hate to speak the truth.”

Jacq Hixson-Vulpe, a senior consultant of special projects at The 519 – a Toronto organization dedicated to advocacy for the inclusion of the LGBTQ community – disagrees with that statement and said that Rowling’s comments are “so disappointing.”

“Considering so much time was taken to educate and engage with J.K Rowling about the issues facing trans and queer people,” Hixson-Vulpe said speaking to CTV News Toronto on Friday.

And while they support the statement put out by Indigo, Hixson-Vulpe said that more needs to be done.

“I think that making a public statement should be considered as one part of other larger actions. For example, during Pride, many corporations come out with statements in support of the LGBTQ community, but if they’re not followed up with action through elevating those groups, those statements fall very flat.”

Asked what action should be taken by the Canadian retailer regarding Rowling’s books, Hixson-Vulpe says there should be “repercussions when people are espousing a harmful view.”

“She is ultimately doing harm to marginalized communities with an opinion that is denying people their humanity,” they said.

Hixson-Vulpe suggests that one such action could be taking all the money from the sales of Rowling’s books and donating it to support trans individuals.

CTV News Toronto reached out to Indigo regarding their statement and what other actions might be taken but has not yet received a response.