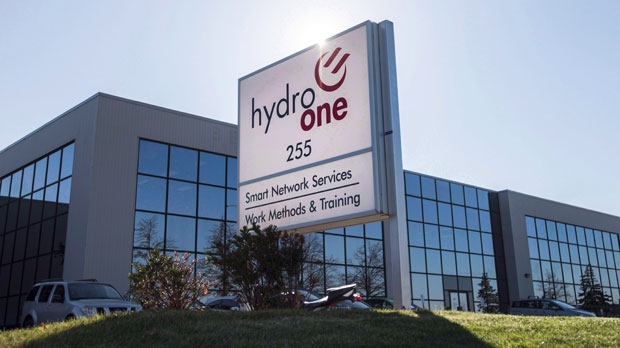 A Hydro One office is pictured in Mississauga, Ont. on Wednesday, Nov. 4, 2015. THE CANADIAN PRESS/Darren Calabrese

TORONTO -- Hydro One says electricity rates for some seasonal cottagers could jump by nearly $1,000 a year if Ontario's energy watchdog makes good on a plan to eliminate a customer class geared to them.

The utility said Tuesday that the Ontario Energy Board -- which regulates the sector -- has asked it to cut a seasonal customer category that applies specifically to cottagers.

Hydro One's vice president of customer care said the company opposes the change, which he said would mean over half of its customers -- 84,000 cottagers -- would see their rates jump.

"Really, it comes down to an issue of affordability for our customers," said Imran Merali. "Eliminating the class will result in significant increases ... and the magnitude of the increase is not something that is good for our customers."

Hydro One said the OEB ordered it to mitigate the impact of any potential change larger than 10 per cent a year, which means incremental increases would be brought in until a customer is paying the new rate. It said it could take a decade to ease customers into the new rates.

The OEB said the seasonal class isn't working because all users in it aren't paying their fair share.

"The OEB's concern was that the distribution rates charged to seasonal customers are not reflective of the cost to serve them," spokeswoman Mary Ellen Beninger said in a statement.

Hydro One has proposed an alternative plan that would keep the seasonal class in place and cap distribution rates for some high volume users in 2021. That plan would allow more affordable rates for those who use their cottages for longer periods of time.

"Hydro One does not profit from either of the proposed solutions," Merali said. "There are not incremental profits that will go to Hydro One under the Ontario Energy Board's proposal or under the alternate proposal we recommended."

The utility said the OEB's proposal would result in moving cottagers to other rate classes. It filed a report last month with the energy watchdog that said the impact of the change would outweigh the benefits.

The executive director of the Federation of Ontario Cottagers' Associations said the change, if it moves forward, will have a large impact on thousands of the group's members.

"That's not in anyone's budget," Terry Rees said of the potential increases. "It's going to definitely cause some people to take a look at their living situation."

Rees said the association has been advocating for a "reasonable and fair" system for all throughout the regulatory process.

"We want something our members can understand and that doesn't push the bounds of affordability," he said.

The OEB has not made a final decision on the plan and could not say when it will be released.