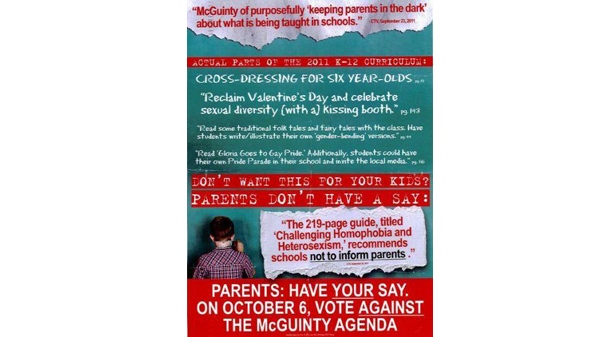 Liberals say that PC candidates in Brampton West and Brampton--Springdale were distributing this flyer over the weekend, that the Grits have branded as homophobic.

OTTAWA - Progressive Conservative Leader Tim Hudak is standing by a controversial campaign flyer about sex education in schools that the Liberals are calling homophobic and misleading.

Speaking at a campaign event in Ottawa, Hudak insists Premier Dalton McGuinty is trying to keep parents in the dark about what's being taught in schools.

The flyer makes a number of inflammatory claims about Ontario's sex-ed curriculum, including a warning that it teaches "cross-dressing for six-year-olds."

The Liberals say the flyer completely misrepresents the sex-ed curriculum, which hasn't changed since the Conservatives were in power.

They've accused Hudak of resorting to the same divisive tactics that he employed in the early days of the campaign, when he slammed a promised Liberal tax credit as an affirmative action program for "foreign workers."

Hudak climbed down and stopped using the phrase "foreign workers," but is making no apologies about the flyer with just two days to go until Thursday's vote.

The controversy grew more heated Monday night, when journalists following the Hudak campaign tried to question a Tory candidate who had reportedly distributed the flyer in Brampton.

Brampton West candidate Ben Shenouda was taken out the back door, with some reporters complaining that they'd been pushed out of the way by Tory staff.