How Ontario's COVID-19 models are comparing to reality

TORONTO -- Ontario officials last week released modelling data on how COVID-19 is predicted to spread across the province.

With current health measures in place, experts are forecasting between 3,000 and 15,000 deaths in the province during the span of the pandemic.

The modelling data predicted that in a best case scenario by April 7 approximately 800 people would be in intensive care across the province. As of Tuesday, according to Ontario’s Associate Medical Officer of Health Dr. Barbara Yaffe, there are 233 COVID-19 patients being treated in intensive care, 187 of which are currently breathing with the assistance of a ventilator.

This means that there are approximately 567 fewer patients in the ICU than the projections provided by Ontario’s ministry of health.

Cases on the rise in Ontario, Quebec

Despite the fact that the number of COVID-19 patients in the ICU is less than what the province’s health officials had projected in a best case scenario, the number of positive cases in Ontario continues to climb.

Since March 22, the province has continued to add new cases each day by the hundreds.

Quebec is in a similar position. They too have reported hundreds of new cases on a daily basis. On April 5, the province reported 947 new cases alone. However, as the case count climbs, new projections provided by the Quebec government on Tuesday predict there will be far fewer deaths in that province than in Ontario. 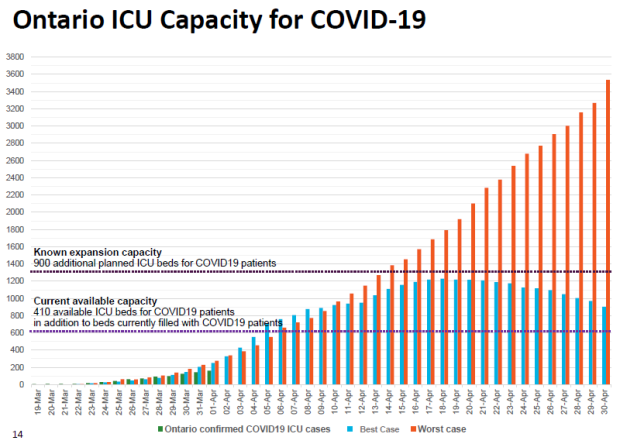 And while cases in central Canada surge, it’s a much different story in British Columbia. The numbers on the west coast have been staggered, with the highest daily report of 145 cases on March 24. On Tuesday, the number of new cases in the province reached a three-week low with just 25 cases reported.

B.C.'s Provincial Health Officer Dr. Bonnie Henry was asked about the relative success on Monday, to which she credited a mix of luck and preparation.

So where are we now?

More than 150 people in Ontario have died from COVID-19 and there are 4,726 cases in the province. If the models are accurate, there would be an additional 75,000 confirmed cases of COVID-19 in the next 23 days.

According to the data, in a best case scenario, the number of COVID-19 patients in Ontario occupying intensive care beds will peak in 11 days, on April 18, with just over 1,200.

When releasing the modelling data last Friday, Public Health Ontario’s President and CEO Dr. Peter Donnelly stressed that the projections are not set in stone and will be updated as they receive new information.