How 20,000 students are being connected to education during the pandemic

TORONTO -- Multiple partnerships in Peel Region are helping equip students with computers to access education during the COVID-19 pandemic.

“If we don’t give education, proper education to our kids, they’re lost, and I don’t want them to be lost,” CEO Saleh Al Aroud told CTV News Toronto.

Grade 12 students Dandré Jo’elle Henry and his three siblings have been sharing one computer, but Monday they received two of the donated Chromebooks for their household.

”Honestly. These guys have a bright future ahead of them,” Jo’elle Henry said, putting his arms around his six-year-old brother and eight-year-old sister.

“It’s a wonderful opportunity,” he added.

Peter Joshua is the board’s director of education. He said since schools closed, the board has focused efforts on distance education, which includes providing resources and activities online which means students need access to technology.

Filling those orders has meant putting together desktop computers already in house at the board, the Ontario government purchasing iPads with free wireless data plans until the end of June, individuals donating equipment no longer needed, and private enterprise stepping up with gifts.

“The opportunity that has been afforded to us through partnerships has been key, because we know this goes beyond just providing some loaner devices to families. There are some families that don’t have technology of any type in the household,” Joshua said.

The collected computers go to the board’s warehouse, before being distributed to schools and where they are handed out by educators. About two-thirds of the needed devices have now been given to families.

Venture X has started a campaign to support more students beyond Peel Region, and around the GTA, with a campaign called Tech4Learning.

“I believe that every child has the right to have their own device,” Al Aroud said. 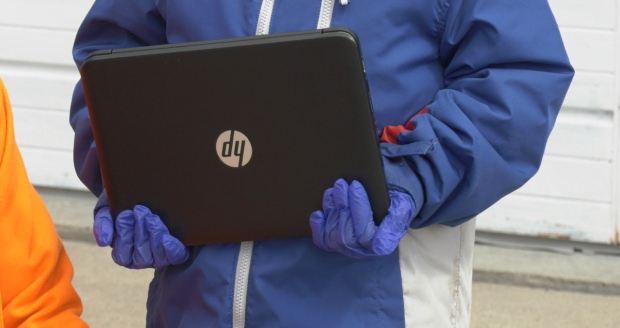 He said it’s important children can personalize their device and know they won’t have to return it.

Anas Saltaji is the COO of Venture X and a father of five. He has four kids attending schools in Peel Region.

“We want to make sure as a community that children have an equality opportunity at learning,” he said.

“Unless they have access to technology they will not be able to keep with their peers.”