'Hopefully he pulls through’: Toronto firefighter in intensive care after falling from burning building

A captain with Toronto Fire Services remains in hospital in critical condition after he and another firefighter fell from the roof of a vacant downtown building where a three-alarm blaze broke out early this morning.

Crews were called to a fire at an abandoned house in the area of Jarvis and Shuter streets at around 2 a.m.

Deputy Fire Chief Jim Jessop said the fire was so extensive that crews were unable to conduct a primary search to see if anyone was inside.

He said the two injured firefighters fell from the roof while attempting to ventilate the building.

“They were... trying to cut holes in the roof to release the hot gases and smoke, which is normal practice for any fire,” Jessop said.

“But there was a significant volume of smoke and the firefighters thought they were stepping off onto a ledge and unfortunately there was no ledge. They ended up falling down well over three storeys.”

Jessop said that within minutes, the firefighters were transported by paramedics to the trauma centre at St. Michael’s Hospital.

One firefighter suffered a broken leg and is expected to be released from hospital later today.

The second firefighter, a captain with Toronto Fire Services, sustained “substantial” injuries and is currently listed in critical condition in the intensive care unit. 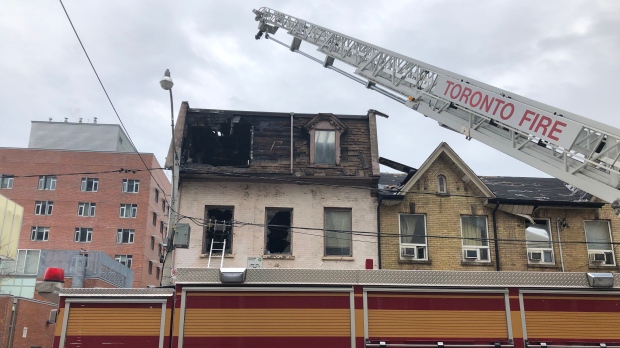 “My heartfelt thoughts and prayers are with both of our injured staff members today,” Pegg told reporters on Saturday afternoon. "His family is with him. We have staff that are there. I will going from here to St. Mike’s to offer whatever support I can offer."

He said the crews responding to the fire this morning were faced with a “difficult operation."

"The firefighters that were injured today were... working very, very hard under very challenging conditions. It’s dark (and) there is a large volume of smoke that is emanating from a very, very aggressive fire. They were working diligently to create ventilation structures that would allow us to remove the trapped heat, gas, and smoke from the building," Pegg said.

"The reason that is happening is to enable our crews to safely get inside and conduct that search and make sure that there is no one in the building...I can tell you from first-hand experience, when we are operating under those conditions when we don’t know that everyone is safe, our folks assume and take on a considerable amount of risk."

Pegg added that it has been a tough day for members of the service and said supports will be provided to anyone in need of assistance.

Earlier this morning, Jessop expressed frustration over the number of fires that occur at abandoned buildings across the city.

“This is not uncommon and to be very honest, it is angering,” he said.

A little over a year ago, another firefighter was injured after falling off of a roof while battling a fire at an abandoned building on Mutual Street.

“These are the risks our firefighters, the women and men, take every day to protect the city,” he said.

Very thankful for the dedicated @TorontoMedics and @StMikesHospital professionals who responded to and are treating our injured @Toronto_Fire Firefighters this morning. Thoughts and prayers are with our critically injured Captain and his family today. @TPFFA

Mayor John Tory visited the scene of the fire this morning and confirmed that the critically injured firefighter is a 36-year veteran of Toronto Fire Services.

"Even our deputy chief here at one time, this was his captain… (he) could have retired by now but like a lot of them, they have a great passion for their work," Tory said.

City will look at ways to make sites more secure

He added that officials are looking into the possibility that someone got into the boarded up building and started the fire.

"The building is one of those older buildings that they think somebody might have been inside… that somehow set a fire. This has been a recurring problem for them (firefighters) in the last few months, these closed heritage buildings," Tory said.

He added that the city will have to take a look at how to improve safety at these sites.

"We just cannot have the lives of people… put at risk by the fact that people can get into these buildings over and over again," Tory said, adding that a fence may be an option for keeping members of the public out.

"We cannot have our firefighters, and police officers, and other first responders put at risk by these buildings being too accessible. So I’m going to take that back to city hall on Monday and we’ll see what we can do to make things better."

Cause of fire not yet known

The investigation into the cause of the fire is currently underway but is in the "preliminary stage at best," Jessop said.

The Office of the Fire Marshal (OFM) is now on scene. 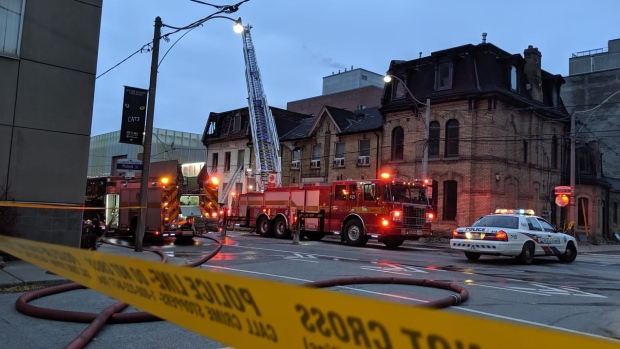 William Hay, a supervisor with the OFM, told reporters that at this point, “everything is on the table” in terms of cause.

“Overall we are initiating the investigation now and hopefully we will be well on our way by tomorrow,” he said.

“We’re at the stage now where we are going to see what steps need to be taken to make the building safe to do a comprehensive investigation."

Hay could not definitively say where the fire started.

“Just from an exterior view, there seems to be more extensive damage near the roof but it is a little early to speculate,” he said. “It looks to be an interior fire.”