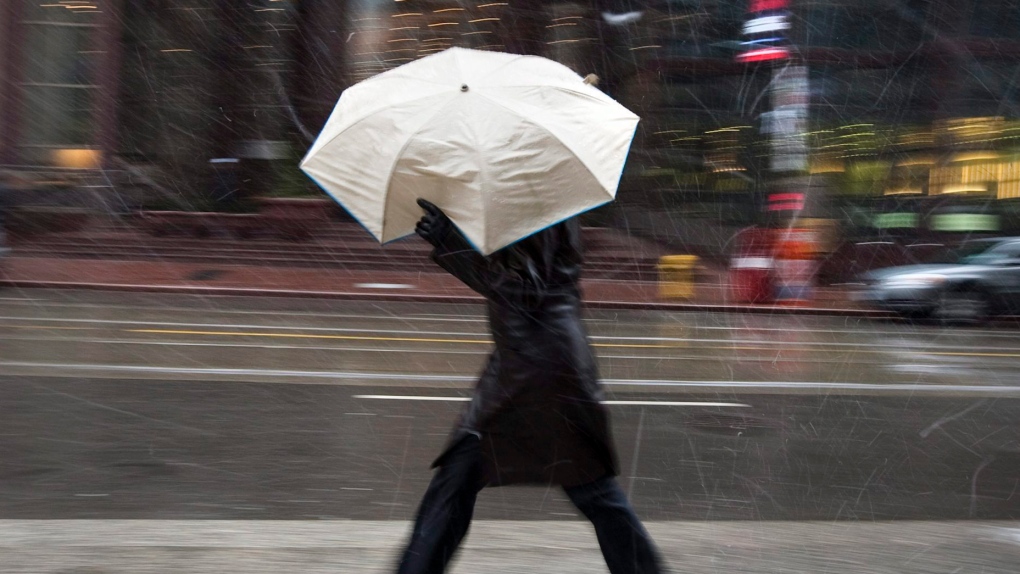 The GTA and much of southern Ontario is being pounded by an ice storm that Environment Canada warns could result in power outages and hazardous road conditions throughout weekend.

Many areas of southern Ontario are currently under a freezing rain warning, including Toronto and Hamilton, and slippery conditions have already been reported in the GTA.

Peter Kimbell, a Warning Preparedness Meteorologist for Environment Canada, told CP24 that areas west of the city could see up to 30 millimetres of freezing rain by Sunday.

“We don’t think we’ll get quite that much in GTA of freezing precipitation,” he said.

“Southwest of the city, so Hamilton to Lake Erie to London to Sarnia to Kitchener-Waterloo, those folks could easily get 20 to 30 millimetres in this storm. Some areas possibly even a little bit more."

He said the main concern is widespread power outages, which have already occurred in some areas west of the city.

Alectra Utilities reported that close to 14,000 customers in St. Catharines were in the dark on Saturday afternoon but as of 3:10 p.m., power had been restored to all but 1,400.

Hydro One said at 7 p.m. Saturday that more than 14,000 of its customers are without power due to the freezing rain.

“We saw the impact of 20 to 30 millimetres in 2013 and there could be close to that amount with this storm,” Kimbell said.

But Ontario Provincial Police say the weather is partially to blame for two collisions that closed the westbound express lanes of Highway 401, near Morningside Avenue, this morning.

OPP Sgt. Kerry Schmidt said they had responded to more than 500 collisions in the GTHA by mid-afternoon on Saturday.

Drivers are urged to stay off the roads if possible and take transit instead. The City of Toronto said it had 80 salting trucks on its roads on Saturday afternoon.

By 10 p.m., Toronto police traffic services said they responded to 150 calls for collisions in the city on Saturday.

Brad Ross, a spokesperson for the TTC, said the city’s transit agency is doing a number of things to mitigate the impact of the impending storm.

“The big concern really is on our streetcar network. We have applied an anti-icing agent to our overhead wires on our streetcar lines as well as at switches at intersections and the like so that those switches don’t freeze and can move,” Ross told CP24 Saturday.

“We will be running what we call storm cars, those are streetcars that are in service but they have a slider on the trolley poll to knock any ice off the overhead.”

Ross said maintenance crews have been “strategically placed” in areas around the city to assist streetcars that may become stuck.

“With the bus network I think it is important that people remember that we can only travel as fast as the conditions safely allow for so our partners at the city I know are out there and ready to go with salters and brine and other things that they are doing to keep the roads safe,” Ross said.

“Our buses will get you there safely but it will be much slower than normal as this storm progresses.”

By Saturday evening, icy road conditions were forcing a number of bus and streetcar diversions:

• 29 Dufferin bus diverting via Rogers, Caledonia and Castlefield due to ice at Dufferin and Hunter

• Every second bus on the 505 Dundas route operating between Broadview and Dundas Stations via Queen Street.

• 47 Lansdowne bus diverting NB via Kitchener, Gilbert and Eglinton due to ice at Caledonia and Kitchener.

• Buses running on 501 Streetcar between Neville Park and Greenwood.

• 514 Cherry streetcar being serviced by a wheel-trans bus between Distillery Loop and King, the Dufferin portion of the route is served by the 29 bus.

“Due to the higher than acceptable possibility of slips and falls due to road and walkway conditions that are likely to materialize through the course of this morning, the University is enacting Weather Emergency Procedures and suspending normal University operations today, effective immediately,” officials at York University said in a statement issued Saturday.

“Any exams affected by the suspension will be rescheduled.”

Due to the poor weather conditions, Maple Leaf Sports & Entertainment has confirmed that Jurassic Park will not be open for Raptors fans to watch tonight's playoff game against the Wizards.

Pearson Airport is advising passengers to check their flight status ahead of time in the event of weather-related delays and cancellations.

The worst of the storm is expected to hit Saturday night and Sunday morning, Kimbell said.

“The nasty stuff that is hazardous is really today, tonight, and tomorrow, particularly tonight and tomorrow before the temperature rises above zero,” he said.

The conditions are expected to improve late Sunday afternoon but rain will continue into next week.

The Toronto and Region Conservation Authority says a flood watch is in effect until April 17.