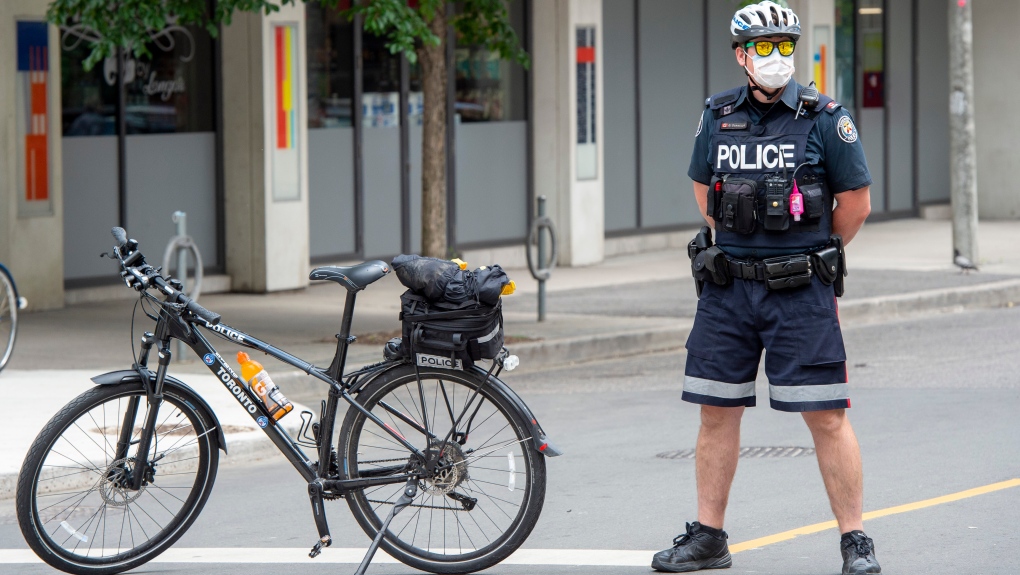 A Toronto police officer watches during an anti-racism march in Toronto on Saturday, June 6, 2020. THE CANADIAN PRESS/Frank Gunn

TORONTO -- Civil liberties groups are launching legal action against an Ontario law that lets the government provide police with personal information about people who tested positive for COVID-19.

The province announced in April that it would provide first responders with a database detailing the name, date of birth and address of all patients who tested positive for the virus.

The Canadian Civil Liberties Association (CCLA) and its partners have now served a notice of application to begin a legal challenge at the Ontario Superior Court of Justice in an effort to stop the provincial government from disclosing the information to police.

“Individual Ontarians’ health information is among the most sensitive personal information the government holds,” Abby Deshman, the director of the criminal justice program at CCLA, said in a statement.

Deshman said that given "patchy nature of COVID testing and the risk of asymptomatic spread," police should not rely on test results to keep safe from the disease. Instead, she said, police should practice the same public health advice the rest of the province is following.

Deshman added that sharing COVID-19 test results with police is “not necessary, and in fact undermines an effective public health approach to this pandemic.”

A spokesperson for the Ontario Ministry of the Solicitor General confirmed with CTV News Toronto on Friday that the government was served with a notice.

“On July 7, 2020, Ontario was served with the Notice of Application for Judicial Review,” the spokesperson stated. “As this matter is subject to litigation, it would be inappropriate to comment further.”

In a previous statement, the province said that the measures were taken under the Emergency Management and Civil Protection Act to protect first responders by allowing access to the information of people they come into contact with amid the pandemic.

“Once the declaration of emergency is lifted, this data will be made inaccessible to first responders,” the province said in a statement in April.

But the groups involved in the legal action, including the Aboriginal Legal Services, the Black Legal Action Centre and the HIV and AIDS Legal Clinic Ontario, say the measure violates their constitutional rights to privacy and equality.

The groups, including the CCLA, argue that the measure also breaches provincial health privacy protections and is not authorized by Ontario’s emergency legislation.

“People are less likely to get tested or seek treatment because they are afraid of being targeted by police. We have seen this happen in relation to the criminalization of people living with HIV and people who use drugs.”

The groups say they wrote and sent a letter to Ontario’s Solicitor General on April 22 about their concerns, but have yet to receive a response.