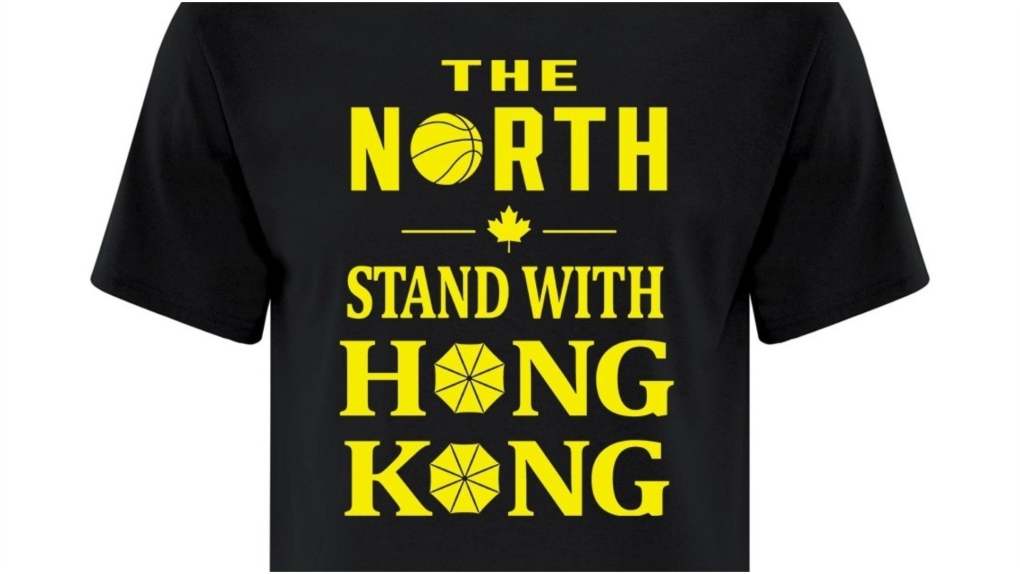 The image of a pro-Hong Kong T-shirt is seen here in this photo. An advocacy group plans to hand out thousands of these shirts at the Toronto Raptors' home opener on Oct. 22. (Torontonian HongKongers Action Group)

Fans of the Toronto Raptors will be offered free, branded T-shirts at next Tuesday’s home opener, but the merchandise did not actually come from the team.

A pro-Hong Kong advocacy group plans to make a statement on opening night and hand out some 7000 shirts to fans as they enter Scotiabank Arena.

According to the group’s GoFundMe page, more than $34,000 was raised to distribute the “The North Stands with Hong Kong” T-shirts.

“We would like to give away some “The North Stand With Hong Kong” T-Shirts to the Raptors fans to show the world that we share the same values and we stand with Hong Kong,” the GoFundMe page reads.

The guerilla-style campaign follows more than four months of protests in Hong Kong over a proposed extradition bill that would have allowed residents to be extradited to mainland China for trials.

“People in Hong Kong have been in pro-democracy protests since June, and continue to face increasing police brutality,” the GoFundMe page reads.

“While you may hear news from Hong Kong more frequently, in the People’s Republic of China, all these [sic] news is censored, and all the people in mainland China were told: people in Hong Kong are demanding independence from China.”

The protests in Hong Kong have been a hot button issue in the NBA in recent weeks.

On Oct. 4, the Houston Rockets’ General Manager Daryl Morey tweeted in support of the protests, but later deleted the tweet after blowback from Rockets’ owner Tilman Fertitta.

Listen....@dmorey does NOT speak for the @HoustonRockets. Our presence in Tokyo is all about the promotion of the @NBA internationally and we are NOT a political organization. @espn https://t.co/yNyQFtwTTi

More than a week later, NBA superstar Lebron James added fuel to the fire by saying Morey’s tweet was "misinformed", to the displeasure of protesters in Hong Kong and the world over. 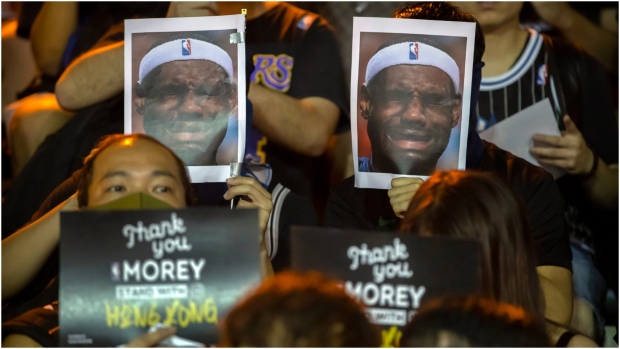 Demonstrators hold up photos of LeBron James grimacing during a rally at the Southorn Playground in Hong Kong, Tuesday, Oct. 15, 2019.  (AP Photo/Mark Schiefelbein)

As of Oct. 17, the Raptors organization is not involved in the giveaway and the league has not officially endorsed the campaign.

CTV News Toronto has reached out to the Toronto Raptors for comment.