Service on GO Transit's Milton line has resumed after a massive fire at a commerical property in Mississauga forced trains to stop running on Wednesday.

Aerial video footage of the scene showed heavy black smoke rising from a building in the area of Dixie Road and Dundas Avenue West.

No injuries have been reported, but Mississauga Fire has warned residents to stay away from the area. 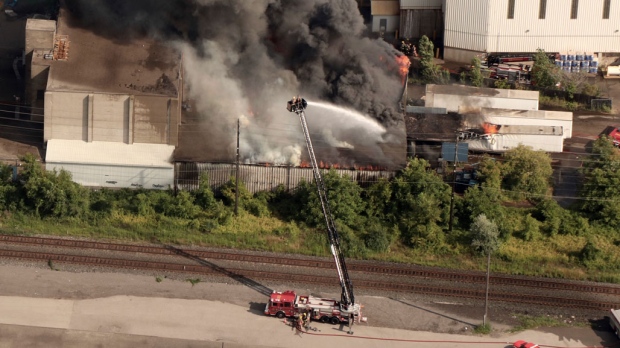 Anne Marie Aikins, a spokesperson for Metrolinx, said yesterday on social media that crews needed to access the GO transit corridor to battle the fire. Trains were holding at Dixie GO Station and several trains along the Milton line were cancelled.

In a tweet on Thursday morning, GO Transit said trains on the Milton line would resume this morning but there would be two fewer coaches.

Milton #GOtrain passengers: Service is running on your line however, the Milton GO 06:23 - Union Station 07:24 train will have two fewer coaches this morning due to the fire nearby Dixie GO. Please see https://t.co/FCxkTd812W for updates.

Police have not said what caused the fire. Roads in the area were closed as crews work to put out the fire.